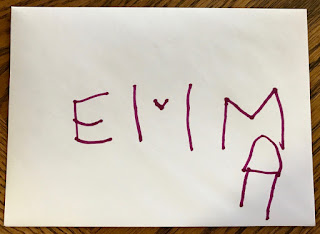 I'm taking the boy to a little girl's 5th birthday party today. Emma. I think she's turning five. I wanted the boy to participate in the gift giving process. We went to a little store here on Sonoma square and picked out a game, a chutes-and-ladders type thing. They wrapped it for us as we paid. We picked out a fun birthday card.

He did well enough on the first E. His initial M was as much symbolic of the letter as it was meant to be representational of that specific character in the alphabet. His second attempt displayed his true proficiency in the matter. It is with the letter A that he achieved his opus in terms of representation and composition.

The A will often naturally seek the crevices of any other letter it finds. I mean, it just fits up in the M, doesn't it? That is both science and nature working together to keep the alphabet healthy. It's how new words are made, through the commingling of consonants and vowels.

I am eager to meet some new parents today. I will make sure to leave Emma's present in a way that it invites the most views by other adults whom I have not yet met. Perhaps it is sexist of me, but I know that there will be more women at this birthday party than men - there always are. My guess is that nobody will mention the phallus on the gift's envelope. We'll see, perhaps there will be something other than humorless housewives attending.

Maybe there will be wine for the adults, something that people are very cautious with at kids' birthday parties. Though, it is the specific liquid elixir that contains the invitation and capacity for just this sort of conversation. It is more likely that there will be no wine in open sight, or hidden wherever I'll be sure to look first. Never wishing to send the wrong message, parents can be relied upon to express their consistent support for conventional communal morality.

If anybody ever expresses concern over anything I do I'll just say, Oh, we also have a place in Europe. Nobody ever knows how to respond, or why.

When they ask where, which they always do, I'll say, On the coast, of course!

Maybe I should start wearing a body-cam, like everybody wants the cops to do. I could just let it run and then upload the videos to show you here, to give you an explicit idea of what a social disaster I can be. It's not so much that I don't respect norms as that I don't even seem to know what they are, where they stop, or how flexible they are around the edges before they tear. Things can change in an instant, often in response to me tugging at one side like a stray dog that has wandered in the house, confusing a child's prized toy as something to hump furiously and then bury in the backyard, clawing at the dirt with my lipstick out, looking around every now and then with a crazed gleam in my eyes, the brightly colored toy clenched in my teeth, an occasional growl of burying bliss to arrive in my throat, the self-satisfaction with the mound of dirt when it is all over, circling it, making sure that nobody would ever suspect what treasure is contained therein, awaiting its own rediscovery at the slightest whim of my snout, the will of my front paws, the dogged determination of my digging.

I don't know, maybe the world is just filled with closet cat people.