SF in the dark 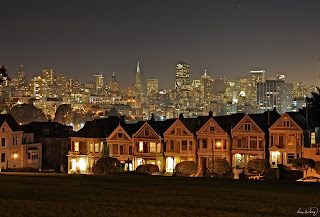 I sit here in the cold of SF. A last minute opportunity came up in which an apartment-sitter was needed for a woman whose father had passed away, a favor for the friend of a friend. She had to rush elsewhere. She will be in New York for another day, probably no more. I can't seem to get any warmer here. I'm afraid to touch things in her apartment and don't see a thermostat. I don't know how people in SF do it. California is beautiful, SF is wet and cold.

Man, I had a bad day yesterday. Nearly impossible to put into words, maybe one day I'll try. I took most of the day off from work and tried to understand it, tried to take as much of it in as I could, the rest I had to shelve, where - I do not know. It is all mysterious, each new day brings more.

This place doesn't even have wi-fi, I do not think. I'm sitting here writing directly into MS Word. Feels strange, somehow more serious. There are more options to stylize in Word. None of which, I do not believe, will translate to this site. I have become used to having coffee in the mornings. It is a habit of middle age that I have adopted just in time to qualify.

Though, it may also be a time for the shedding of habits, whether wished for or not. I never wanted to be a coffee drinker, the stuff didn't at first appeal to me. Funny, how the things that do not appeal to you become another thing altogether once the habit is formed. The things that might make you uneasy at first find their way into your system and make themselves comfortable, putting up shelves and shopping for couches, hanging paintings on the wall. They become the things that you love, and wish to hold on to.

Ah, such is life.

A novelty: I will walk to work today. I had to put my car in a rather expensive garage, being in Nob Hill there was no parking, and a "special event" of some sort was happening so they sensibly applied their special rates. We drove in repeated rectangles looking for a free spot, but there was nothing. It is best to leave it there for the duration. I am a city dweller again, for a little while. I will try to enjoy the feeling, see what it evokes. I must traverse the treachery of the tenderloin to get where I need to go.

The word rectangle sounds like my life feels right now.

A friend lives across the hall from where I am apartment-watching. He pays as much in rent as our mortgage, just to live in the city. Seems strange to me now, that. Impossible. Though when he moved here from Chicago he had planned on living with his girlfriend. He came out and got the place for both of them. Coincidentally, her name is Rachel. We went to dinner last night and mused at the accidental fluke of it over Thai cuisine. Well, I did anyway. They broke up before they got serious. It was not meant to be, I guess - and getting serious is a big step, one not to be taken lightly. All big steps are heavy, that's the very thing that makes them big.

Well, I'm going to go back to bed and see if I can conjure up a few old dreams, sleep is sometimes the best place for them.