"This train's not gonna wreck itself..." 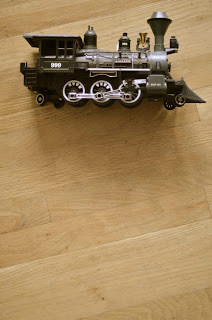 Drifting is fine for a while. After that, one should either be traveling, centered, or lost altogether. Drifting works best when there is an occasional place to return, a center of sorts.

That's my wisdom for the day.

Sunday's a good day for such sagacity. It has time to stretch its legs and find itself. Wisdom loves to barbecue on the lord's day, the Sol Deis, the Solis Invicti.

Sunday is the loneliest day, the one in which to fall in love.

Love, it's what we're told. One problem with love is its unregulated nature. Everybody has their own idea as to how it should be done.

There's always a "No!" hiding out somewhere, particularly in true love. Thousands of them, waiting to be launched, from any angle.

It starts with a seemingly endless series of yes's, the sound of hissing snakes. Well, then it ends.