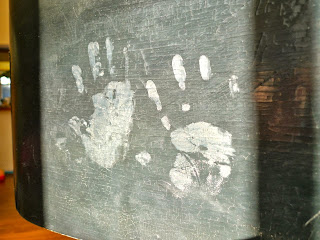 Another day, I wake up with a single word floating through my mind, wondering how it got there.

Barely a breeze. There is a stillness but also a distant sound. I sensed it was coming but I hadn't believed it, now it has passed. This life requires a little faith, whether you believe it or not. Perhaps I will seek stillness. It is a state that I can move through where others choose to sit; an untroubled calmness. It is easy, as the buddhists teach us. You just perplex your mind and reflect, and there it is.

There is one less thing that I am now uncertain of, one thing added to a different pile of questions. I believe that. I have faith in it. It is simple inventory, an accounting of the accumulations of life. This might be very premature, but I have accepted it. It took a few days, even less than I thought, but silly faith in a thing wears off when it finds no corollary in another. By itself faith is madness, just look at anybody who believes in their own gods, or goddesses. It takes another silly fool to nod their head up and down in reverence for the thing to work at all. If two people agree on a thing then it is not madness.

There must be a "me too" involved.

The nature of faith takes odd shapes. It changes your life but not always for the better. Putting your faith in the wrong things can leave you worse off than when you were just waiting, watching the world. I knew someone who put too much faith in fiction. It was me, or the character of me.

I was talking to a friend and he told me that if he were to ever get into a relationship again he would require that they had their own life, their own place to live, and he would see them whenever he could. He would also enjoy quiet evenings at home, alone. That sounded perfect to me. Where does one find such a thing, I wondered.

Never forget that you are just a guest in another's life. You are also a guest in your own life. This is not to say that it's not "yours" to do with as you wish, but it's healthy to remember that we are all just passing through. All things are temporary but one.

Do you see my new buddhist nature...

Then later, I was chatting with a few people and relaying the recent circumstances of my life. Comical and erudite as I was there was still something missing in what I was saying. It was as if I was in the gravity of a thing but could not name it. But it held me there, spinning in comical orbits, talking out loud. Then it occurred to me, luckily before I had finished my paragraph. So, I began another.

It wouldn't make sense to try to relay it here, it was a glimpse of revealed wisdom, and we know the dangers therein.