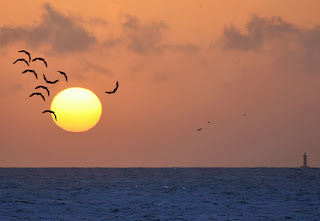 Recently, my father told me that I spend too much time living in the past. I reminded him that it is the place where all my memories currently reside - and who else am I going to have Thanksgiving dinner with other than my memories? He did not find this funny. But, he's right, in a way. There are many internal holdings that I've never bothered letting go of; childhood memories or difficulties, the adult re-writings of same. I've held them all for so long that they've become something else altogether. Memories too often repeated become shape shifters, werewolves in the moonlight.

Perhaps that's not the right way to describe it. The description makes it sound very easy, as if it is simply a matter of releasing your hand when it is filled with beach sand, the wind and the sun will take care of the rest. Just like giving your life over to the Jesus. I've never bothered coming to terms with incidents and episodes from my past. This site is an occasional attempt at doing so, but can only ever be partial in that regard. The mind holds things in different ways, memories slip in fantasies.

For some, maybe it is more like sand. I feel as if I've been reminded of this occasionally with inspiring framed pictures in people's bathrooms. A beach scene where we are told of the transience of life. This thought, somehow, never strikes the proud owners of the mini-poster as a horror, but rather as something to be briefly sermonized with a cursive quotation and an image of seagulls along the shore. The word cherish is often floating there.

I've always operated on the principle that - in any type of relationship - the other person's fears mainly reveal their own weaknesses. A person that insists all the time on the importance of "honesty" is often dishonest, either with themselves or others. A person who lives in fear of being cheated on is often unfaithful. One who demands partnership above else can hardly provide it. If you perpetually claim that somebody is in denial then there's a pretty good likelihood that you might be experiencing denial also, etc.

The list goes on and on and is never complete. That's what I've found: that life is incomplete. So, be wary of those who insist upon living life "completely."

Absolutes barely serve as reminders when repeated so often. Until they one day hit you and you find yourself alone, staring at a framed postcard in bathroom, having an epiphany about time and how little of it there really is. So, you live life as completely as you can. There will always be others to let you know the parts you need to continue to work on.

Somehow, in all of this, you have to find a way of coming to terms with yourself, as incomplete and ill-equipped as you may be. The more you can accomplish that, by whatever route, the easier it is to not fret over others. They're going to do whatever they're going to do. They are also on a limited run, we all are.

If you find yourself, one day, insisting on apologies from somebody that is reluctant to provide them, then you might just apologize to them and let it go. It's very likely that they don't feel as if they've done anything wrong. Badgering them into an admission of guilt is a terrible waste of time. You're wasting time at twice the normal rate, yours and theirs combined, maybe more.

Knowing this won't always help you though. Practicing it brings you a little bit closer.

That is my wisdom. I want it written in a framed sky.

I listened to a conversation about modesty the other night. I knew what the word meant, but hadn't had much experience with it.

It is an important virtue, deserving of its own poster. Though it's far too humble to ever ask.