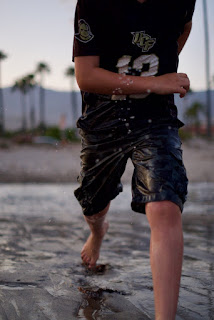 I wrote something terribly honest last night but decided not to publish it. That was for the best. I copied and pasted some of the text to CS and he commiserated a bit, but also reminded me that we all live in the hells that we create and accept for ourselves.

Also, things did not seem quite so bad this morning. My main issue right now, I believe, is that I probably needed some time and space to myself more than I needed a beach trip to Santa Barbara with my fellow shelterers. It was a long drive, which resulted in an affection-less landing. We did make it out ot the beach and the boy seemed to enjoy running into the water.

We will go to the beach and set up a tent today and bring snacks and wine and whatever else is legal or barely illegal to do where the dirt of the earth meets the waters of the Pacific. If I get bored I'll walk up and down the coast asking if everybody saw the shark, speculating that it was either a bull shark or maybe a great white. Then I'll remind them not to worry, that the flu kills more people every year than sharks and riots combined.