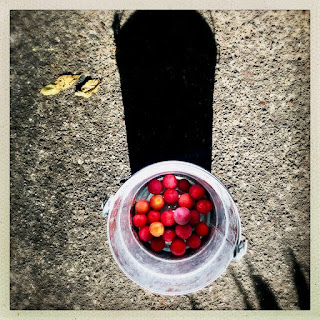 We went swimming again, almost as great as yesterday. I was mixing the fun in directly with being a dad this time, which is a drag for a kid. Of course it is. You can feel it in the air, happening as you speak. Some days you can not stop yourself from parenting. Another couple years of this and I will hate me, also.

We're watching E.T. now. He was just abandoned by his fellow midget lizards in their disco colander.


Plum cherries - picked from the tree, gleaned from the ground, washed in the sink. The boy encouraged me to spit the seeds back into the little pale and ricochet them off the wall, so that it sounds as if I was spitting chewing tobacco into a spittoon. Happy to oblige, it became comical and fun.


I am struggling with fatalistic feelings too much of my time. Just a newish grim acceptance of certainties - that life must give way to life for anything to emerge, that all things must pass and will. I had a dream about the friend who lost the child. There was a picture in the dream that reminded me of my mother, gone now almost thirty years. I only glanced at it for a second, but there I was in a lost and now foreign place. It was like no other dream I've had. I saw something that I may come to terms with over time. A thing I can not unsee, can not unmake to be less than a true vision and memory. It now exists.