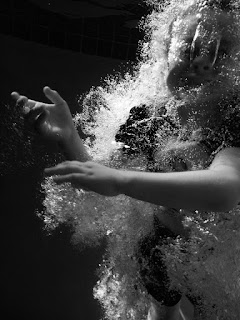 The boy has grown tired of me taking his picture unless we're somehow actively engaged in doing something in which he feels he can demonstrate some thing, or to put on some sort of a show, like jumping into water where I wait underneath the surface, hoping to click the shutter release at the correct moment. Or rather, the best moment.

Those two sentences should be my entire post for the day. Those who know me also know better than that. I have neither learned nor practiced the art of silence much. I have never been the strong silent type, but rather the dangerous and talkative sort. Meaning, if I talk enough then eventually I will bring trouble upon myself.

Just a few nights ago I was at a party and somehow brought up immigration. It ended poorly, with somebody scolding me for bringing up politics at someone else's house, which may be true enough though I was not the one uttering offenses, I hope. Mostly I just listened and acknowledged our shared and inevitable doom. Apparently if you mention anything political then you become responsible for all of the unintentionally revealed ugliness of others. I said so little, really, by comparison.

I learned my lesson, again. Don't encourage people to tell you what they think, or give them a chance to prove that they don't. Just let them live in peace with their own grotesque set of preferences. Nothing that you're going to say is going to help anyway. I'm talking to myself there, again. Maybe others are very understanding and say thoughtful things that help people become better humans. I must be the other guy. I look at most people as if they are horrors of humanity. Most of the time I'm not wrong, or not entirely.

If you want to know if a person has taste then take note of what they eat. Or rather, what they consume, then produce.

After that, it's all so very easy.