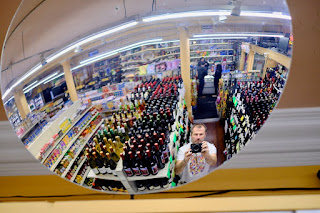 I'm selling prints of this one. Reach out to me privately, I can put you in touch with a dealer near you. You can see the curvature of the earth in this one, proving once and for all that convex convenience store mirrors are round.

How is everyone in America not demanding change in the streets? Maybe they are - all of the nation is asking if anyone happens to have a spare quarter. We have a president that seems to have no understanding not only of the constipation he swore to correct, but of basic law and legal procedure. Why should he have to know that stuff, though, really? He's rich. He wants to redefine attorney-client privilege now. He is shocked at the unprofessionalism of his primary lawyer - the guy that ran the taxi cab scams - at having recorded their conversations, which potentially documented one small sliver of his illegality.

Even I have started asking myself how many years I'd spend in prison for Trump.

Okay, none of that talk. That's what ruined me here: politics and social issues. Opining.

Yesterday, we went for a hike, all three of us - mom, the boy, myself. We went to one of our local favorite trails, the Sonoma Overlook. It was closed for repairs. Luckily, there was an alternate trail advertised as part of that closure, Montini, whose trailhead was only 1000 feet away by foot or by car. We hopped in the car and drove over to it. We parked in the Sonoma police station parking lot, a thing that left me feeling uncomfortable, but I kept pretty quiet about it.

We walked the perimeter of the baseball field to the trailhead and crossed over a small service road leading to what I believe are some water reservoirs. I saw what seemed to me to be a trail and started off on it, but got some pushback from the others. I kept going, insisting that this nature preserve was so small that there was no way to go wrong. This is rattlesnake season and there was a recent report of a grandmother strangling a rabid bobcat with her bare hands (watch that video, it falls into the category: genius of speculation), but what the fuck... must we live our entire lives as if always shopping for groceries?

There was enough of a trail there to trust it, so we did.

The less than official path led more directly up the hill, along a few small crevices where water had been running for a century or more. It meandered but continued along a sensible route, spreading out so as to almost disappear in open areas, reforming as a footpath when required by the tree-line and terrain. Such things teach small lessons about the recurrence of being human, lessons learned over and over, though each time they are interesting to witness, or can be. You can see the thoughts of others and the effects of physicality in a subset of population over time.

This renegade trail eventually met up with the official one, at the red rock quarry. The boy and I climbed around inside on the rocks a bit, discussing where snakes like to rest, and how they feel about being startled. He is developing a taste and fascination for the natural world, as so many young kids do. I first wrote boys instead of kids. That was and would have been more true, but we are reminded of the damage we do by stereotyping particular types of people and things. Categories of thought are bad and should be extinguished. We know that now, and we are all committed to fighting thought at every possible front. Language is imprecise and dangerous. It is what has been making us all so unhappy for centuries now, it seems. Being anything that there is a word for is oppressive.

Where we finally met the real trail it went off in two different directions, as trails do. We chose to continue going up, to the boy's mild dismay. He was hot and had eaten too much sugar earlier in the day. It was, in fact, the reason we were out for a hike. Mom could not take it any more. The kid was fueled by maple syrup on pancakes in the morning, then chocolate and ice cream around lunch time. We know that sugar doesn't do any such thing to kids, but you can't get anyone to believe it, and it is a convenient excuse to punish a child with an uphill hike.  Scientific tests and observations reveal that sugar does not change a child's behavior, but rather only changes a parent's expectations.

Don't try to discuss this with a parent. They need science less than they needed Hillary.

Anyway, we used the dreaded sugar to explain our son's behavior to him, flaunting the facts, insisting on the nonsense that suited our narrative, and so we told him that we would need to institute a stricter daily cap on intake. Later that same night we went to see a movie and we shared a cup of some frozen ice cream nuggets that were simply delightful.

As we kept heading up this new trail, we came upon a number of sheep grazing, all protected by an electric fence that we had been warned about by a sign at the onset. I was immensely curious about the charge it carried, and had my son not been there I'm confident that I would have tested it. I am from Florida and these things must be measured with human flesh, and do not trust anyone that would come to conclusions otherwise. It is the best way to be sure of danger, possibly the only way.

Mom and I took the opportunity to discuss electricity with the boy - how dangerous and yet fascinating it can be. She spoke of sudden death, but also of balloons against wool and rubbing your feet across carpet in socks. I spoke of police tasers and 70s rock and roll. Our words tried to convey the tingling menace and lighting-fast nature of electrons suddenly allowed to freely traverse a point of contact. We talked about low level currents producing sensations that can be silly and fun, holding charged balloons over your head and feeling your hair rise in response, then up the danger scale to involuntary muscle contraction. I may have tried to use the word fibrillation in a sentence. Then of course: death.

So, a fun family hike, filled with useless parental information.

We reached the end of the trail, unceremoniously. There was a sign warning that the trail was ending, then another just beyond that threatening private property and what would happen to heedless transgressors. Like the other path earlier, it was apparent that not all had abided this warning. We were tempted, but parents must teach a child restraint. There are rules that govern behavior, and those are best understood before entirely abandoning them. At least then, when hat times comes, the consequences arrive as less of a surprise and more of a patch of rebel honor. He is still too young for all of that and I should not be the one to guide him, such a thing perhaps sends the wrong message.

We stopped in the shade at the end of the trail and drank water from a shared canteen. I wrapped my t-shirt around my head and went shirtless on the descent. 50 is the new anything. Mom tried to have me put suntan lotion on, but that stuff is tick butter. I know better.  We found one on the boy when we got home, so I was right.

We took our newly found alternative pathway down, once we re-discovered it, just as we had ascended, retracing our own steps as best as we could, agreeing on direction and pace. I had mentioned the flow of water on the way up as being one way to keep a relative idea of where you're going and how one should return. So we commented on water's path, even though there was no water at the time and there had not been in quite a while. Its effects carved the ground before and beside us. There were only a few areas that would have required any climbing and the downward sloping contour of the valley did not require it.

We arrived at the service road where we had started, all agreeing that "our" path was superior to such an intentionally uniform one, planting the idea of rebellion in one of its forms, in spite of ourselves.