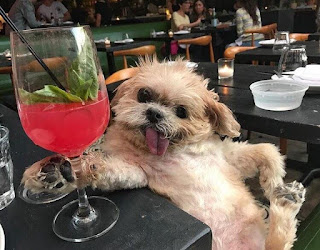 (Me, discussing politics on a weekday)

I had an experience a couple weeks ago now that has been bothering me in micro doses ever since. I'm told that I brought up politics at someone's house party, and I probably did, though I'm confident that I framed it more as a socio-political concern. I must have mentioned the separating of children from their parents at the border. The result was that at least one woman outlined her frustration with Mexican kids getting free lunch while hers did not. I was then blamed for her frustration and departure, though I'm not sure how or why, other than the obvious: I gave her license to speak her mind.

What came out must have driven her a little bit mad.

Ever since, I've been thinking about it and I'm still wondering where the magic all happened. How does the one person mentioning something become responsible for the adult response of another? And why does this mainly apply only to religion and politics? Are people so hideously misinformed that we shouldn't even talk about it.

I guess so. People can talk about sports all they desire because that subject is entirely inconsequential.

I found out later - a thing I didn't know at the time - that the criteria used for school lunch assistance programs is the line that distinguishes who is above or below the federal poverty level. So, if I am to understand this woman's frustration more fully, it is that her family is not as poor as some of the Mexican families whose children go to school with hers. Perhaps her thinking is not that sophisticated and she simply believes that others are getting what she deserves and the issue need not be confused with specificity beyond the obvious difference in skin color.

Who knows. At one point I might have mentioned that where we were standing used to be Mexico. I don't remember all of the details. To be very honest, I thought it was a normal conversation all the way up until the woman was leaving angrily with her family and I was offering an apology that I truly had not meant to upset her, and I hadn't. I'm not sure what I said that changed things. I suspect it might have been that another woman there agreed with something I said and so she may have felt outnumbered. Though I now realize that she might not require my input to be angry on this subject at all.

I saw the woman - who seemed to hate me for existing while holding differing opinions - at the July 4th parade. She gave me the stink eye because I had not yet reformed to her way of reasoning. She looked at me as if I was an illiberal immigrant. I gave her a fine, big smile to show that there were no hard feelings. I wished that we had more time to chat. I could have reminded her how she asked me how much money I make, which is a lapse in social grace of another kind. The forgivable kind, it seems. She then used that imaginary financial chasm between us to emphasize her victimhood, though I'm still not quite sure how she did this. All things seem to become my fault within the alchemy of argument.

There are two types of people now that detest wealth: liberals and conservatives. It must be so tiring to always have the wealthy above you and the brown people below. They're not opening up any new spots in either location.

Where do good, honest Americans even go any more?

All that I learned from this experience is not to talk to poor people. A hard-won lesson at a discount price. Poor people don't think like me, they don't share my values, they support policies that they don't seem to understand. Perhaps the use of the word "policies" in that last sentence is giving them more credit than they deserve. They probably do not register "policy" in their prejudices and preferences, but rather they seem only suspended in ever ossifying opinion.

Ah well, I am not here to further denounce their poverty and ignorance, beyond what their own words have already accomplished in that regard. They are the people that my politics attempt to help, or so I've been told. Just think, there would be no poverty remaining had Bernie won. Maybe a little bit left lying around with Hillary, if only to keep up political appearances.