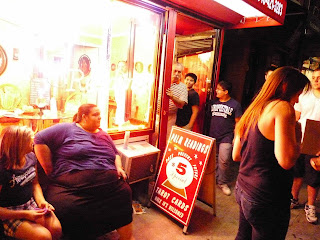 
I went to the Russian-Turkish Baths yesterday.  It was horrific. I thought I was going to die.  I kept telling myself how good it was for me, but the entire time I kept thinking that some types of death must also be pleasurable, as the body begins to accept that death is imminent and the endorphins are released in abundance.  But it wasn't like that at all, it wasn't pleasurable in the slightest. It was awful.

I'm told that it's good to sit in these heated rooms and let the mind-bending heat open the pores of your skin so that the toxins will be sweated out. If that is actually what is happening then I must be near the verge of death, or just past it.  It forced me to acknowledge, to a very specific degree, what a horribly unhealthy life I live.  I had psychic-visions and went on an inward spiritual journey and found my "animal-spirit" there in the darkness... It turned out to be a honey-badger.


It might only be that it has been too long since I've seen my wife, and the unhealthy lifestyle of a man left to his own devices is beginning to catch up with me, and show.  She has been in California, preparing for our new life there.  It didn't take very long at all for my personal habits to slip back towards complete and total squalor.  I thought that it would be kind of nice to have some time to myself, that I would catch up on a bunch of things that I wanted to do, that I would have even more time to myself rather than less...

Nope.  I just ended up trying to see as many people as I possibly could before leaving for California. So I've been running around like a madman, pretending that I'm still in my 30's, and with people that actually still are in their 30's, pretending to be in their 20's.  It is all catching up with me now.

I have stopped writing because I've had many regular readers encourage me not to "lose my edge..."  Perhaps I haven't been as clear as I had hoped.  It is precisely my "edge" that I am hoping to lose by moving to California.  The last few days in NYC have been quite typical. I've had a bus driver try to attack a friend and myself when getting into a cab. I had a cab driver drive me around lower Manhattan in circles late at night pretending not to know how to get from there to the East Village, which is about a thousand yards away. I got into an argument with a "psychic" about what constitutes acceptable civil behavior concerning walking on the sidewalk.  I got into another conversation with diverging views with my pharmacist about whether 30 Xanax prescribed at "up to 3 times a day as needed" is a one month supply or a 10 day supply.

In all of these altercations I considered myself to have "won." Any of them could likely have been expanded into an entire post of its own but I've been trying unsuccessfully to decompress, in anticipation of the differently paced lifestyle that I'm hoping to enjoy in California.

Perhaps I'm only fooling myself.  It would not be the first time.  Perhaps life will not be as different in California as I imagine it to be.  Maybe there will be an entirely new set of maddeningly behavioral   protocols there that will drive me nuts.  Or maybe I'll join a hippy commune, or a satanic cult, and spend the remainder of my days either growing pumpkins in a dolphin commune or making the overlord of darkness happy by listening to non-stop heavy metal music.