Mormons in the sun 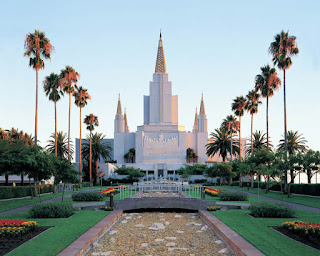 (Oakland Mormon Temple)
My fears about the computer getting stolen were relieved when I picked the computer up from UPS three days ago.  When I got the computer home it boots only to a black screen and then after about a minute the fans run on high.  Nothing else.  I won't bore you with the details but it will need to be checked in for a repair.  It is very likely just a cable that has come undone.  This would explain both symptoms.  I won't bore you further with it.

I had bought a desk for the computer after picking it up from UPS. Thinking that I will need a desk now that it has arrived and the box is undamaged and all looks good with it.  Nope.  It is always something. Life is an unending effort.  No, that is not true at all.  Life ceases becoming an unending effort at some point distant.  But for now I just want my computer working again.  It is a new one, one that I rely on heavily.
I have been almost completely cut off from electronic communications in Sonoma. It feels like I am on a camping trip inside of our condo. My phone only works here and there and in certain places around town, practically not at all inside. You will get a ticket if you use your phone while driving so there is really very little time for communicating with others.  The rest of the world is beginning to fade from sight, from mind.
Speaking of tickets... We were returning from a bbq in Oakland yesterday and when we got to the end of bridge connecting Oakland to Marin County there was a $5 fee, which we were happy and willing to pay.  They only accepted cash, however. So there was a $25 fine for not having cash ready. What kind of freakin' hillbilly state have we moved to?  I will fight the fine, of course, though I question when I will have the time to do so.  Soon I will return to work and much of my time will be spent there or in transit to and from there.  My desire to fight iniquities in the California road system remains strong, my anger unabated.
New York got hit by a media frenzy last night.  Apparently they were evacuating parts of the city, moving people to safer / higher ground, where their cell phones might work.  I know the feeling.
.
Posted by Sean Q6 at 10:08 AM