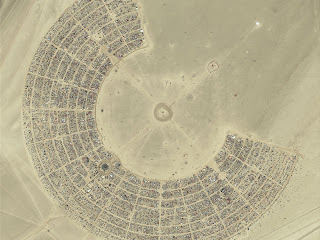 (Burning Man, aerial view)
Tonight is the new moon.  It actually occurred a few hours ago, so I guess that makes it last night, though only by pure definition. It occurs mostly over the course of this night. Different definitions of what constitutes the "new moon" have existed that would also include tomorrow night, but there really is no point in being fussy about it. For my purposes it occurs tonight and it is when the moon is entirely dark, not when it begins to emerge from the darkness a "day" after conjunction with the sun.

Living on the west coast has already started to have an effect on my perception of time.  It is an interesting way to see America, especially after living in NYC for so long.  It is easier to see now why people from the west coast dismiss the very NYC-centric view of America.

The people going to Burning Man this year will enjoy a waxing crescent moon in the late evenings and early night for the next week, ending in a quarter moon (approx.) on the 5th when the festival wraps up and people pull themselves and others together, clean up, then head homewards.  It will be a particularly dark few nights to begin with, tonight being the darkest of all of them, for those going out a day early.
Many of my friends go each year. I have considered trying to relay my Burning Man experiences here though perhaps I will wait for another time for that.  It is late and I want to go to sleep soon.   It is best not to excite the mind when trying to retire.
I don't give much credence to these things (moon phases) but it is uncanny how many significant events between Rachel and I have occurred on nights of a new moon.  I always try to point out to her when they are happening.  This gives some credit to the credence, I know. It is the same phenomenon that encourages people to think that bizarre things happen on full moons, because the moon being full gives events added significance, makes it memorable in a way that seems repetitive, predictive.
So we drift on, the moon ever returning, convincing ourselves of either this or that, whatever aligns the heavenly bodies with our wishes, whatever gives our impulses flight.
.
Posted by Sean Q6 at 1:04 AM