I promise to go wandering 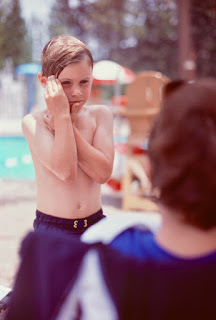 The Christmas guest is gone. Now, a week remains that can be spent or squandered, or a bit of both. I'm thinking about taking a road trip, maybe by myself, maybe with the boy, maybe with mom, too. We have yet to establish family quorum for the subject. That will be this morning's dilemma. I only use that word since I know that unpleasant options will need to be discussed, even if they are discarded, before we can arrive at the desirable versions. Then, we're all on the easy street of final decision and action.

I tell myself that I will be envious of CS when he has nothing but free time to do as he wishes. I feel this envy in advance of the actuality.

I dream of taking month-long drives to places I've never seen before. If you've never driven through the bayou swamps heading west out of New Orleans on the I-10 then you haven't seen America, yet. I've only seen it once, but have seen nothing much further west from Lafayette, or north of there, by car. It's about two days from New Orleans to Marfa. Giving you a stop in Austin, if you want it. Or San Antonio, if you have any reasons or questions there.

I spent a fair amount of my years flying over America looking at maps and the landscape below, dreaming one day of driving through these places, some of them I did, if there was another gig a city's drive away, or a chance to hang out with a group of newly made friends that had a sound system set up at their place in Baton Rouge or Fort Collins or Alpharetta or Park City or just outside of Charlotte. The midway point between Portland and Salem, a guest room, stay as long as you want. All over, and all of it now over. I have visual memories of neighborhoods outside of Pittsburgh and Philadelphia and Memphis and Seattle, but had no camera with me. The 11th District in New Orleans that has estate after estate, then house after house; the mausoleums of the graveyards that separate them; of course the impoverished neighborhoods there that surround the city, also. That haunting and beautiful gothic everything.

I took too many things for granted. Life seemed rich. I had little interest in taking any time to stop and photograph any of it. Now, I dream of starting out in a car with no answer as to when I would return, though being a parent precludes those visions from achieving much lift.

It is not just the idea of driving from here to Marfa, or further on to and through the deep south, it is the feeling that I could indulge any urge to wander that might happen along the way there, or on the way back. It is this life which robs me of those sorts of fantasy indulgences.

I always thought Dylan said, I promise to go wandering in response to the line On to your own parade, cast your dancin' spell my way from Mr. Tambourine Man.

The line is: I promise to go under it, but I hear it the other way every single time.