... after the second sip 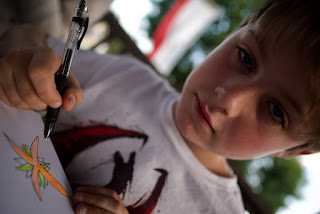 This is the moment that I explained to the boy who Devin Nunes is. No, it seems pretty obvious that this was the moment that I asked him to look up from the coloring he was doing so that I could take a picture. His response is accurate, correct, and non-enigmatical. We were sitting at our favorite pizza place with the house red wine. The boy has not yet developed a taste for the stuff. He accidentally took a sip of mom's white wine and did not care for it. I explained that nobody does, but that's what adulthood is all about, kid.

This picture was taken after his second sip: 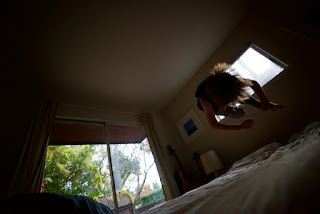 Speaking of second sips, I fear that I may have finally slipped over into complete pot-headedness. I spend most of my free time now figuring out chords to Grateful Dead songs. I've learned a handful of them this week and last - Deal, They Love Each Other, and even (gasp) Casey Jones.... There may be more, but it is all a fog now. The Grateful Dead were not for everybody, but if you can stomach minutes and then hours of nearly incoherent musical ramblings to happen upon the occasional moment of beauty and greatness then they just might be the right band for you. I can barely play along with them with the chords I have learned, because they're often using different phrasings, where the full chords sound out of place. So, there is always a bit of a challenge to being the new guy in the band. I was thinking about joining the Allman Brothers, but the playing is far too coherent, and Phish are too talented and unlistenable. Who wants that? I suppose I could settle on The Stones, but I have all six strings on my guitar and can't find any heroin in my old coat pockets. I suppose I could adopt the playing philosophy of Jerry Garcia: keep digging.

(Disclaimer: I am not a very good guitar player. Ask anybody. I talk about it so much for this reason.)