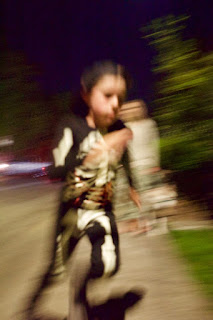 Well, the power has not gone off yet and there are no winds. It is a strange thing, to be told that something is going to happen because something is going to happen, but then to see no evidence of the thing that is meant to happen but the result was promised and is on its way. Trump times are strange times. We live in the wealthiest third world nation ever. I barely hear people discussing infrastructural collapse, but it seems that the smart and good people might want to start thinking about it. Maybe it's just because I live in California, but it is already happening. They're shutting down the power grid here because the infrastructure can not survive the wind.

You know what I meant, though, not this sort of collapse but like McCarthy's parable, The Road.

Well, I would invite an unexpected day off from work. I would pack a backpack and a camera and go for the type ride that I never do otherwise, or only very rarely - an adventure, anything but not another routine. Most everything I like to do can be done without power - cycling, playing the guitar, film photography-  and a break from a computer screen would be welcomed.