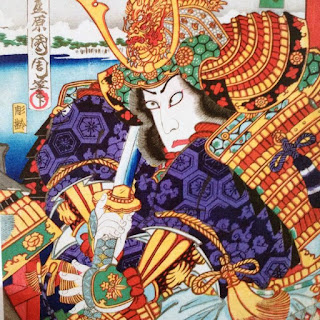 Raquel and I have a date tonight in the city. A hotel and everything. Dinner, a party, then a nightclub. For us, that may as well be going to Burning Man. It's for a friend's birthday. I made her a 6 hour playlist - punk and dub disco - the birthday girl. Not quite festive enough for a birthday party, but great if you do drugs desperately and often.

I probably won't even have a drink tonight, just some chewy pot edibles. I have some shrooms, but what for? I am in training, trying to lose ten pounds or more. If you can't increase your cardio/endurance enough in one month then decreasing weight accomplishes a very similar thing. It makes you seem stronger. I could use some feeling of strength. Strange things happen to an aging man. There is a cosmic softening. Or, comic suffering.

Oh, I don't mean that. The samurai sword is not a symbol. There are drugs that give you the approximate firmness of a teenager. I just meant the mellowing of age. It is rare that I wouldn't rather be sleeping now. I look around at the restaurant, bar, nightclub, bathroom mirror and I struggle staying on nodding terms with my previous self.

I'll try to relax and laugh a little. It does wonders, makes you flexible like a teenager. If feeling as a teenager is your public or private prize.