I can't remember if I've used this picture already or not. I probably should use a pic I took yesterday. We took an expedition of parents and kids up the creek that runs behind the house.

Here, let me find one. 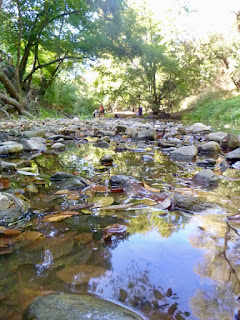 That pic makes it seem as if it was all just a light riverwalk, which is a partial truth. There were some sections that were deep and filled with all shaped rocks and boulders and portions of collapsed structures populating the waters that could not be peered into for guidance. A few of the mothers were nervous.

To Rachel's credit - this was all her idea and she pulled it off fantastically. It was unexpected and wonderful and exciting for the kids. A great unknown. The best part for me was watching adults - worse: parents - confronting unscripted nature, even in its mildest forms. You could see and feel the anxieties emerging and building. We were doing something which contained no instructions other than the direction that a river creates both upstream and down just by its being. Beyond that, everything suggested that most people here in Sonoma do not do this, which creates a sense that maybe we shouldn't be, a thing that kids love and parents fret. The further we hiked upstream, with an accumulation of challenges faced and bested, it did not seem to develop more confidence within the adults but rather that a saturation point of experience had been reached. We turned back before our stated goal, because we knew what was behind us, though with only a vague idea of what was ahead.

Here's another pic from the day. The waters were deeper and darker in spots, but I found less time to take pics during those moments. 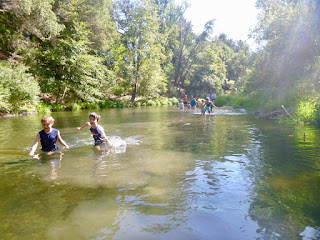 I thought it was all great. I fed off of the kids' enthusiasm for adventure and was secretly encouraging them to push on upstream even as a contingent of parents were voicing their anxieties about not knowing what's ahead. Or more specifically, how far ahead they can return to the sense of control and security to which they are accustomed.

There were almost as many parents there as there were kids, so I was not worried. One of the moms did not seem to care for me discussing the merits and dangers of alligators during our passage though the darkest of waters. In retrospect I can understand her concerns. Kids are fantastical and they love the idea of such things. Her son seemed fascinated with talk of alligators.

I'll take Rhys back sometime and walk all the way up the river to the swimming hole I mentioned here a while back. It is not very far, a few hundred yards beyond where we stopped, past the bridge that they're going to replace soon. The creek is the shortest and most impractical way to get there.

There was a path, sort of, that ran along next to the creek. We took that on our way back, as the banks allowed. 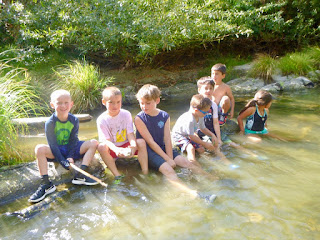 When we came back to the house and put on music and all had a beer or glass of wine you could see the sense of centeredness return, and along with it a sense of confidence that they had in fact done the difficult, messy thing of nature and were now all much better for it.