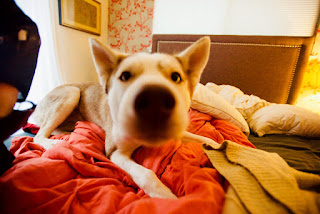 Never a Dull Moment, the curse sent to us in album form from English rocker Rod Stewart. It was the last of his listenable full-length efforts. But I meant the new pup - she's a real dynamo. There is still much adjusting to do.

CS is right about it being a lot to undertake of course, though I feel as if he is enjoying the luxury of complaining about what taking on a pup means without having to do any of the work.

We're dropping her off at discipline school and going to Tahoe for a week. It is the boy's Spring break. I suspect that we will miss her in equal proportion to how much we enjoy the relief from caring for her. She is trying very hard, you can see it in everything she does.

Yesterday, we went to the local skate park. I tied her to a tree outside. I'm from Florida, that sort of thing is still permitted. She whined and yowled for a little bit but then settled down and accepted her fate. After a while it occurred to me that she could run around with the kids in the park, no one else was there. So, I brought her in and closed the gate.

Rhys was standing at the bottom of a bowl. She had run around to the top side. When she saw him she just darted for him, I tried to yell no, but she had already launched from the upper rim into a full breasted dive into the bowl. She disappeared from my site and I expected to hear a snapping sound and her immediate howls of pain. But somehow she landed it. She tried to run up the sides to get out but kept sliding back towards the bottom. I showed her which side she could run up to get out of the bowl and then that's all the kids wanted to do with her after that, just to run and laugh and run. What a wonderful thing is youth.

Everybody loves a puppy. 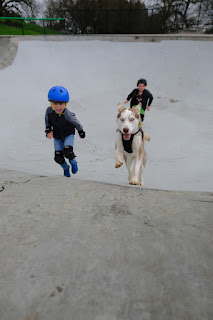