Day 3 in the Snow 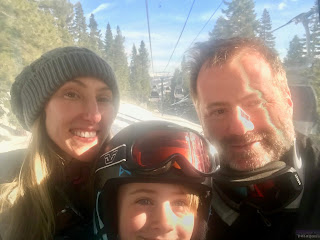 Don't worry about that bit of psychedelia running along the side of my face. I had eaten a handful of candy edibles before we departed for snow stuff and it seems to have affected my phone's camera function. It's as if one of my acid flashbacks had a stroke.

The boy and mom and I had a great day just getting up to speed on our new winter sport - snowboarding. Mom stayed on skis, but the boy and I have learned some basic maneuvering skills in two days. There are some motions that are counter-intuitive and it takes some getting used to to slice a curve while drifting backwards, but once the sound of your nervous system screaming subsides a bit it begins to all feel quite graceful and even... natural, when it is anything but.

My friends are, of course, all proud of my parenting and courage and bravery for learning a new and dangerous sport at this age, but what the fuck... when I told them I like to wear women's underwear they told me to shut up! There were no renegade accusations of bravery and courage then.

CS is right. The Dems are going to find a way of getting tangled up in conversations about Caitlyn Jenner and Ted Nugent next year. You can feel it all coming a million miles away. The Repubs are going to try to mostly keep their heads low and ignore their choice of president. Then they'll start minor arguments over which federal agencies should take on responsibility for funding sex reassignment surgery for non-active military. The Demmies can always be counted on to stick to their platform leading up to an election.

They chose a poor enemy: other Americans. At least the GOP was smart enough to create a threat built on the idea of foreign enemies, LOTS of them, EVERYWHERE. My favorite part of purely partisan politics is that you'll never run out of idiots, no matter which side you vehemently oppose.

Ok, day three in the snow.

Don't worry about that bit of psychedelia running along the side of my face.