the gods of transit

As I sat eating my lunch today on MacDougal Street in Soho, just outside the park I noticed several women walking along with a look of anguished concentration. It seemed as if they walked just a little bit faster then they might break into tears, or a stride. It is a familiar look in New York. Everybody is in such a hurry, and those who are not in a hurry are of a few kinds, mostly to be avoided.

There was one woman in particular today, walking along with express intent. A look of concentration on her face that was not that dissimilar, other than her eyes being open, from the look on a woman's face as she is attempting to navigate towards an orgasm, before the noises start, when there is just the severe look of concealed concentration... off having orgies in Spain, firemen, public spankings, who knows, etc. It is often a look of almost childlike concentration. There is a furrowing around the eyes and a slight wrinkling of the forehead, the mind constricting around its idea of pleasure.  With the look of sought focus, and promise.

Of course, when walking with eyes open, it all changes. It is all different with the eyes open in the daytime, in Soho. There is a direction, but with very different purpose, and they are of course upright and mobile, as I had said, but there is an almost stern look of anguish on the face, a need to get somewhere, and the attending focus of getting to that place, at whatever cost, whether it be resting pleasurably afterwards on terraces in Spain, dressed in silks, being fed wine by foreign and familiar lovers, or simply just late for an appointment. Who knows what exotic practices emerge in that space, or what dull ones.

All it takes is to ask your lover "where were you?" after a particularly intense orgasm to see that it must be a private, familiar and hopefully shameful place indeed.

Or, ask any stranger why they're in such a hurry to be the recipient of vaguely hostile dismissiveness.

The gods of transit are only sometimes the gods of pleasure. 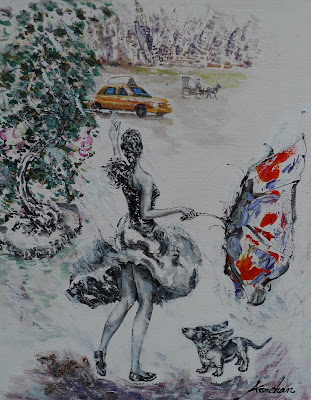