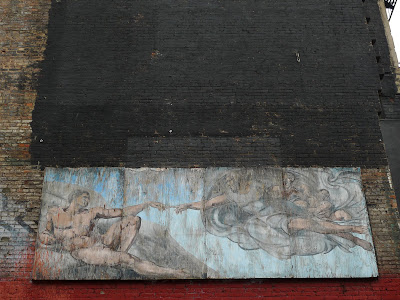 I've walked by this several times and chuckled. The other day I walked by and took these two pictures. After my birthday-weekend I was looking through some of the pictures I had taken recently and these two were there. For some reason they struck me so much more as pictures in my camera than by the painting I've seen on a wall many times. It is so 'famous' that it's easy to overlook, or under consider.
Perhaps that's what I've been doing too much of: under considering. I am usually plagued with the opposite affliction: over thinking. Well, at least that's what everybody always seems to accuse me of. But the under-considering is an equal danger, perhaps even more so.
I will try to do neither today, though it is a constant challenge. Like the two famed characters in the painting.
The fading of a madman. 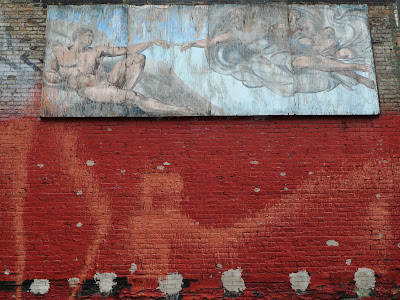 addendum: I wanted to write more about these pictures but I am exhausted and beaten, all self-inflicted, but beaten nonetheless. It takes too much time to recover from anything any more. I am going to San Francisco this weekend and I am terrified. We're celebrating a good friend's 40th birthday in Sonoma and then Halloween in San Fran the next night, then straight home and back to work on a 6 day stretch. I don't know how I ever used to do this sort of thing professionally. I don't know what else I was going to say about these pictures but I felt there was more to say. I have been warned not to opine, but since when have I heeded warnings? Peligroso, Achtung, Opinions!!!!...etc…..
Posted by Sean Q6 at 8:44 AM