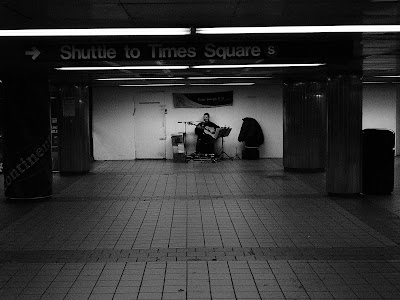 I feel like I am busking lately. Well, not far off. I have a job, but... it is something that just takes time from other things. Sometimes I wish I were just singing songs somewhere for money. Just playing the guitar and singing well enough to have people stop and listen.
I once read about an experiment done in the Boston subway. A guest virtuoso violinist took a multi-million dollar violin (Stradivarius maybe?) down into the subway and played one of the most difficult to play yet beautiful pieces of music ever written for the violin. I forget who the composer was but I want to say Bach or Beethoven, it was definitely a recognizable name. During the entire performance only one person stopped, a young boy, who was rushed away by his mother after being allowed to listen for only a few minutes. As far as I can recollect from the story nobody else stopped to listen. That was the point of the article.
It was a deeply contrived experiment of sorts, but perhaps a telling one.
The same question occurred to me that I'm sure occurred to you… Boston has a subway?
Posted by Sean Q6 at 10:38 AM