Alarm: fear resulting from the awareness of danger 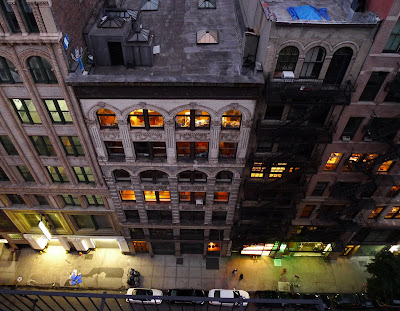 New York is alarming. It is constant. The garbage trucks have alarms on them that never stop. Whether the truck is moving or not, be assured that it's sending out a very high pitch and very loud, repeating alarm. It's as if they're collecting trash in the shower at The Bates Motel.

My friend suggested that it is OSHA that has done all of this to us. The Reagan years. "Safety First"... I wonder if there was ever a follow-up study to any of this. How many minutes, or days, or weeks are these trucks shaving off of our lives because they put us in a near perpetual state of fight-or-flight. There is no escape, and if you tried, there is an alarm for that too.

I can hear the trucks now. I have been hearing them all morning. One truck will go up one side of the street, then another will go up the other side of the street, slowly collecting trash as they go. Sometimes a third or fourth truck will go up my street, I'm never sure why. Perhaps there are trucks that just roam around making sure everyone is alarmed to the fact that they're picking up the trash. They emit this auditory treachery whether they're moving forward like a normal vehicle or not. It makes no sense. I don't think I've ever noticed it in any other city in the world, outside of America. But I am trapped by it here most of all, almost non-stop.

I can still hear two trucks now, only a street or two away; their alarms slightly out of sync though in the same key, the key of dismayed and distant horror, forever returning, like a demented drunk siren.

Though, sometimes when I am awoken by it, and still half in that dream state it just sounds like simple feminine alacrity, the sound of eager readiness, like a cheerleader talking in the other room. Now that there are two of them in the distance it sounds as if it's just twits chatting at a distance, endlessly repeating the same encouraging consternation and eternal readiness.

Ok, I'm a curmudgeon. I get it. But I just feel that the world didn't have to be this way and nobody seems able or willing to fight it, me most of all. I somehow can't resign myself to it, the way everybody and my wife wishes that I could, and still so deeply bothered by it that I can't let it go.

I see why people completely freak-out in this city. Just walk the streets of New York and you will see endless numbers of people who have to listen to these exact same garbage trucks every other morning. Look into their eyes. No, wait, don't do that. Definitely don't do that. Bad advice.

My phone has alarms in it, the computer of course, the front door to my apartment has an alarm on it, every piece-of-crap car parked on my street and every other seems to have an alarm or two in it, I work in a place that has security alarms, the firemen and police have their special alarms, even the ice-cream trucks have child-friendly alarms on them. This maddening Dutch carnival tune that acts on them in complete antithesis to the effect it has on me.

It is all a raping of the mind of man.

What is most perverse about this system is that a normal person reading this post will see me as the alarming part of it all. Me. I am the thing to be worried about. One semi-sane man willing to try to speak up over the alarms and offer some reason in this maddened and overly-alarmed world. A dangerous thing for sure, and I hadn't even mentioned guns yet.

In my almost 12 years of living in New York I don't believe I've ever once heard an alarm that was from an actual break-in, or attempted theft, or actual danger (unless you're a deaf child that falls asleep behind moving garbage trucks from time to time). It's just the perpetuity of an insane need to pre-assert that this store, or car, or pile of garbage is safe from any attempt of malicious danger from the universe. I think we should start installing small alarms in every bag of trash that gets taken out to the street so the garbagemen don't hurt themselves on them. I'm amazed that the city, and the insurance companies, and the union haven't banded together and demanded this, for the sake of all involved. Each shoe should have an alarm built into it that goes off just before it hits the ground.

Oh Christ.... It's a beautiful day, I should be chasing chemtrails....