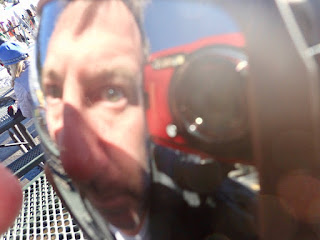 We took another impulse vacation. Just for two nights, one day of snowboarding/skiing, which was yesterday. Now, we're in the Incline Village Hyatt, which is very nice. I am recovering from a series of wipeouts I had yesterday. My inexperience in snowboarding caused a sequence of events, all of which resulted in me taking some pretty hard spills. The short version of the story is that I need to learn to re-compose myself after a serious wipeout or collision. I tried to get back up and ride too quickly, after checking with the woman who collided into me that she was okay - she matched or bested me in weight, so it was quite a collision - not noticing that my left foot had come loose of its binding quite a bit, too much to maintain control of the board. This resulted in an end-over-end flip at a rather high speed and then some rolling, with the board still attached to one foot. If you know anything of the fortitude of the heels and knees of a 51 year old man then you can imagine my pain today. More soreness than pain, but pain also.

Before this the day had been an unquestioned success. I did several runs without falling once. I have finally grasped the basic requirements for the sport, at about $10,000 so far. Though it is unlike anything else I've ever tried. There is a feeling of freedom inherent in the activity, if you can get to it, even though you are only like water with a choice, always taking the overarching path of least resistance, but with some say in the matter. Every 50 year old should take up a few new dangerous sports each year. Or 51.