"Fail We May; Sail We Must" 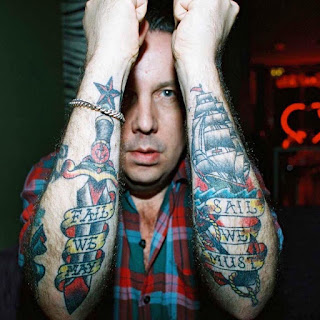 The news hit yesterday, that one of the legends of electronic music had passed away suddenly. It seems impossible. He was always more pharaoh than man. He will likely be interred in the great pyramid at Giza. No need for mummification. His legacy will preserve him for eons among my people. His life as it was seemed so magical as to be from an afterlife, where the secrets of the universe were known only to those there.

His death affected me more deeply than I might have guessed it would, had I been asked in advance. The most precious records I have remaining in my collection have his name on them. Records that I have not ever considered getting rid of. The ones that I told myself that I would hold on to for life, that those fifteen boxes were worth it and didn't weigh that much, nor cost too much to store.

I listened back through so many of his remixes yesterday, either posted by myself or by other friends online. Some of them reaching back to the very late 80s, so many of the early 90s, but mixes all the way up until very recently. They are not tracks that people outside of the electronic world are likely to embrace, or possibly even understand. I will post only one here today, since I have no need to convert the unaware and uninitiated. It might not be the one, at this late age, that would work towards making any converts, either. But it was really something when I was a young man.

One of the last tracks that I produced while still somewhat involved with electronic music was a sort of homage to him - When I'm 64 is the problematic working title. It is 64 beats per minute, so 128 bpm at half-time. It has yet to be released, but that conversation was re-started yesterday as a reaction to the news. It was my attempt at imitating his style of electronic/dance/dub, sort of. His collective recordings from the early 90s acted as a sort of launching point for the track I made. If it gets released then I will post it here. It is currently in a holding pattern at a friend's record label.


One of my proudest moments in being involved in the electronic music scene was when I found out that he liked one of the records that I made and with a friend, advocated for the track in his dj sets and even in interviews. It is a difficult feeling to explain, though of course it is just validation from one of your heroes. It seems simple when described that way. But having heroes is complicated and difficult. Even admitting to having heroes is complicated and difficult, for some.

I can imagine a day coming soon in which there will be no more heroes of mine left. Being reminded that I still have, and perhaps need, a few heroes was a shock.

His story can not possibly be told in just a couple track links.

Okay, I lied. Here's another: