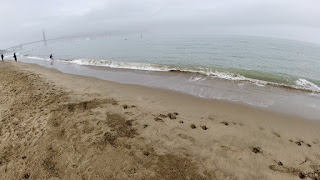 A curse on the cafe of CS. He texted me an article that I had read once before, but was able to suppress the impulse to buy a camera I didn't need. Then he re-sent it, and like a fool I read it again. Now I must act. I have been looking on eBay. The prices are higher than what I want to spend tonight, especially when you start looking at lenses, but not high enough to keep me away forever. I am nothing if not a man of capitalist courage. Be bold and mighty credit will aid you.

I don't need anything else.

I bought a used 12-string acoustic guitar yesterday. An impulse buy, but it is lovely and I've been playing it ever since. All the 12-string rock classics - Over the Hills and Far Away, Wish You Were Here, Ticket To Ride, Hotel California (I sang that to the boy this morning), Give A Little Bit, Hurricane. I think that's all of them. I've been playing anything that I think might sound good on it.

Maybe I'll take a few weeks off from work soon and learn to play Busted Bicycle.

The guitar tech that I've chatted with a few times at the store convinced me that I don't need a new Martin D-28, that the guitar I have is plenty sufficient and likely has much sentimental value for me. She was right. It was comforting to hear it from somebody else. I gave her the guitar to clean and adjust and put new strings on. Alice.

She switched to playing guitar left handed recently. I can hardly even imagine such a thing. The difficulty of it seems tremendous. There are other changes she has undergone, also. She was born an Al then added the ice part, it seems.

I tried to play the guitar left handed when I got home and was ashamed at how clumsy I was, unable to perform even the most basic tasks of the other hand. It seemed much more difficult than starting new with the right hand did all those years ago. Some things will remain beyond my abilities forever. I own books that I will never read and probably never get rid of. We all probably do. Well, those who collect books.

I wanted to ask Alice about switching playing hands, though I did not wish to appear fascinated with her life. But I was. I can not always be trusted to contain my curiosity. She did not seem at all hesitant to talk about the realities and particulars of playing the guitar. Maybe I'll ask if I can call her Candice the next time I go in.

I had a simple and pleasant day today after work. Just driving up the valley to pick up the boy with the dog in the car, something came over me. Difficult to describe, a sort of calmness mixed with satisfaction. It has been some time since I've had such an unhurried and contended sense of a moment. Time barely seemed to pass, maybe it didn't. I wanted to make sure I made some small record of it. This.