On the photographs of the childhood of others 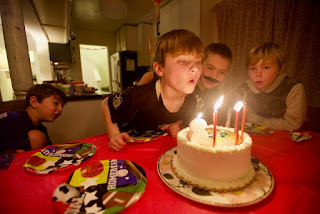 ... because I know how much CS loves other people's childhood photos.

The boy had his first slumber party last night. He'll be 8 on Tuesday, an age which can also be determined from the shape of the backside of the candle on the cake. He loved the slumber party, though mom and I are tired today. Very. We've both taken a couple naps each.

Watching children's social skills and hierarchies develop is interesting. I'm not sure where mine were stunted, but few question that they were. It is quite noticeable. If you can see past my emotional instabilities, my oddly developed  or undeveloped social skills are the next thing most people notice.  It's why I became so good at playing the guitar.

I had written ... playing with myself, but then thought aloud, "Why be vulgar?" even though I laughed at the joke. The inability to always know the differences between vulgarity and humor are part of what I am describing, or trying to.

I never evolved beyond being a class clown. Sorry, not a class clown, the class clown. It's not as if I encouraged or allowed competition. This behavior persists even today. It amazes me that I still have a job. Or rather, it doesn't surprise me that I haven't advanced. I prove early and well that I can do things easier than anybody else, and then I prove that I can find the least amount of work that can be done without being fired. Well, that's not true, I guess, but part of it feels true.

I'm like the kid who perfected writing the letter A in a variety of styles, and often swanned the classroom to advertise the fact, but then never sullied myself by bothering to learn any of the other letters.

I mean, I did learn them all eventually. Though by the time I made it to the letter Z my focus was still on mythologizing those old glory days of letter A. The capital cursive Q still causes me problems.

I learn begrudgingly, by being ashamed of not knowing things. But you'd never know that in how I carried what I thought I knew. Like a billboard for my own effortlessness. My own biggest fan and my own worst enemy.