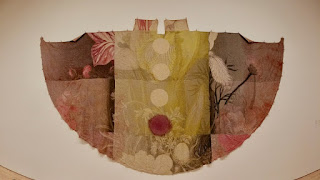 I don't remember who did the piece that is at the top here, but the rest below are Gerhard Richter. They are not how Richter intended you to view his work, I do not believe, because they are all distortions created by the little action camera that I was using, and only details of larger works. I didn't bother trying to be true to the original at all. I've even adjusted the color on them, to make them pop more, for today's kids.

Overall I am deeply disappointed with the quality of the images that come out of the little camera. They are all grainy in low light. The camera really only does okay in sunlight and who wants to see those images.  But the boy seems to love recording our fledgling snowboarding expeditions, and what is your parents' money good for if not to make you, a child, happy.

Nobody says, The children are our future any longer. It's too dark. The irony has become questionable, uncertain, or worse - certain. 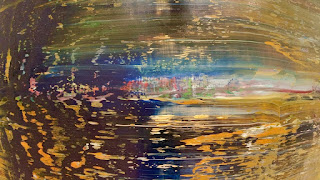 It is easy to like Gerhard Richter, though difficult to find much good writing about him. Critics struggle, it seems, with aligning his various styles. Admittedly, there is much incongruity between the pop-art, abstractions, and his photo-realism or even his glass-plate photography. There's a lot going on there. He's like a seven or eight trick pony.

I tried to read Robert Hughes article about him - The Unblinking Blur - but Time magazine has a pay wall and I can not summon myself to attempt a leap over it, and my knees hurt.

See? That's my take on his art: there's a lot going on there. 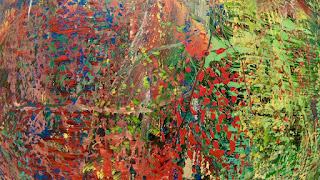 But he is truly great and original, I do believe. To see an exhibition of his works confirms it. The quality, depth, variety and power of his works is apparent. There is something mysterious and yet self-evident there. The blurred images of unknown people, sourced from newsprint and then affected with what I believe to be screen-printing techniques, are both haunting and direct. The Baader-Meinhof series in particular is a powerful "take" on an historical event, where technique, context, and content merge to form an indistinguishable whole. Those now dead bodies portrayed almost as through the lens of a newsprint or documentary memory are unforgettable and yet shrouded in layered mystery. 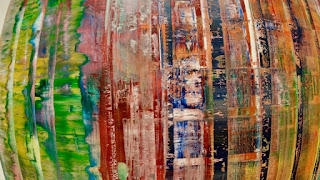 Well, I won't write more about him or his art here. I did not prepare. I did not go to the museum to write an essay, though I do sometimes miss writing them. My thoughts are dangerously disorganized elsewhere in life. It is why some writers drink, and perhaps why a drinkers' repenting is so often short-lived. Not that I am repenting at all, I have been drinking immoderately at times but in peace. I'm not sure how I accomplished it, but I am enjoying a little window of time in which I am being mostly left alone.

I am envious of CS' situation, yet that is perhaps only the idea that I am selling to a willing buyer. I dream of having days of freedom stretched out ahead of me. It has been years since I have had the feeling of being lost in a car - not knowing exactly where I was or where I was going, or when I would stop, of where I would sleep, but knowing that all of those things would come. Being connected always is taking its toll on me.

Alice said that my guitar should be finished today. I am looking forward to chatting with her again. She is the most interesting person I've met in a while, both circumstantially and personally. Also, she is my type - skinny blonde, small breasts, reduced facial hair, etc. No, that was just a joke that occurred to me as a defense in the event that CS said anything about my post yesterday. But he didn't, disappointingly, and I did not wish the joke to go to waste. My interest in her is not sexual and I am not making jokes at her expense, they are for my pleasure, so shut-up.

I have always depended on the shyness of strangers. 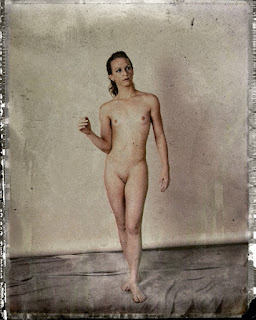