I thought I was someone else, someone good 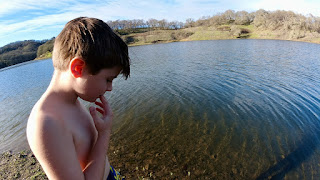 I went in to see my girl at the guitar shop but she ignored me. Well, she said hi, but that was it. The conversation part is over. The guitar looked and sounded beautiful, though. The frets and fingerboard were all cleaned from a decade and a half of sweaty buildup and booger grease. They adjusted the neck so that it was straighter, which improved the action some. I have been playing it all night - Lola, All The Young Dudes, Walk on the Wild Side, Candy Says, Rebel, Rebel. Etc. Any song that I could think of about being ambidextrous. I don't know the chords to that Replacements song or I would have played that one, too.

Ah well, I like used guitar shops. It takes an absolute obsessive to own something like that. Speaking of, the boy and I went to the comic book shop while we were there and bought a copy of an old Fantastic Four. A store that's in the same small plaza, also owned by someone who has clearly converted their preoccupation with their interests into what passes for a job. They all seemed so happy, though. If there had been a used record shop then we could have completed the Holy Trinity of lonely passions.

Cameras are something I can buy online. Though I like gawking at gadgets also. For most stuff, I prefer to go wandering around amongst the irrational and alphabetized hoard. Where will men like me go to be lonely when there are no more storefronts? All of my thoughts turn to apocalypse and the police state when I think about what the future might be. Imagine all those empty store fronts once the Amazonian destruction of the strip mall is complete. The deforestation of America's parking lots. It will make police meaner and more self-justified in whatever violent stupidity they care to unleash on you for ever being outside again.

Wandering will be no more.

Well, I just wanted to sit down and write a bleak note out to the universe, letting everybody know that now that I have my guitar back I'll never need to leave the house again. The earth really does fall away like you see on the left side of that picture above. Strangest lake I've ever visited. Nobody can go swimming in it. From there it is only more slope and then the edge of the world. I think you might come back up on the other side if you can hold your breath one complete rotation around the sun.