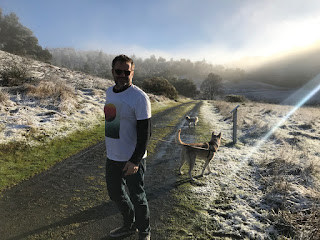 The car was covered in ice this morning. I had already walked the new puppy in just a t-shirt, and didn't think it was that cold, but it was. I had to scrape the windshield and defrost the other windows. Out of pure chance we all decided to give the boy a ride to school this morning. On the way, we saw something we had never seen: all of the mountain tops in the valley above a certain altitude were covered in snow, lots of it. Well, lots of it for Sonoma, California. 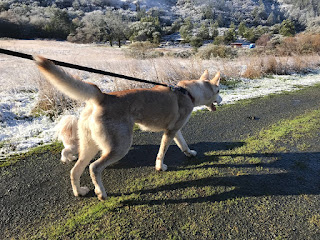 We decided to not take the boy right to class, and instead to drive up to Sugarloaf Park and have a look around. Of course the husky pup loved it, as did Barkley and the boy. They all ran into it and rolled down it and frolicked. That seems like a legitimate reason to use that word.

Akira - which has been our working name for her - broke loose of her harness and ran off up the hill into the snow with another pup. We were able to retrieve her but there were a few minutes in which it was an open question. 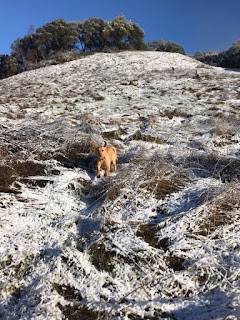