It's hard to be mad at her, but getting easier 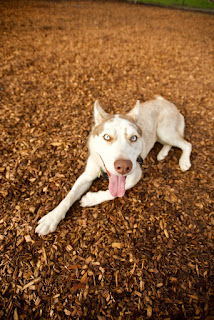 She ate the driver's seatbelt this morning. You must think that I am joking - because no one would let a dog stay in the car after eating the first one - but I was only gone for less than 5 minutes, dropping the boy off at school. She had been fine with 5-10 minute car abandonments before.

But now that she's had a taste for seatbelt....

I have no idea how much it will cost to have them replaced. We have a trip to Tahoe planned for the middle of March. I'm pretty sure mom will require them to be replaced before then. She's like a cop with these things. Like a cop that turns in other cops - internal affairs, special units detective.

Akira is in her crate now, whining and lightly howling. I have been trying to get her acclimated to being crated - which mom has told me to stop calling a cage - but this is a new process for me and one that does not feel entirely natural. She seems to experience pretty severe separation anxiety when I am not very close to her. I am running out of ideas and things for her to destroy. I do not wish to treat a pup cruelly and a crate does feel that way to me a bit, but there must be some middle ground that can be struck between her happiness and mine, her jaws and my stuff.

I have read that when done properly the canine might not ever love the crate but that they will grow to feel safe and calm there. It's very true for Barkley. He seems to prefer his carrier at times of increased confusion or stress, and sleeps very well with the front portion zippered up. He will retreat into it and fall asleep fairly often, especially now that there is a roaming husky pup in the vicinity.

I believed that being here all day would make this a little bit easier. It's like having to satisfy the emotional needs of a super quick infant that has the jaws of a crocodile and the eyes of an Estonian.

I've run out of any new pictures of her. I took several at the dog park the other day.

I did not want you to think that everything had been eaten. Only the things that we can not keep from being in front of her face. 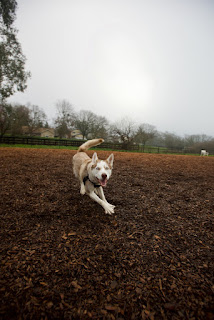