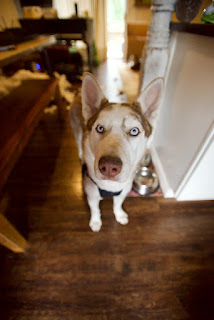 Having a new pup that eats her own bed when left alone for fifteen minutes has magically solved all of my problems. It's an honest blue-eyed miracle, and just what I needed. I needed someone to feed.

Well, there is that sort of stuff going on but she is also an enormously sweet-hearted puppy, which goes a very long way with me. In fact, I insist that you can measure the approximate time of death of the human heart by noting how unswayed it is by innocent love, and how equally averse to communal laughter.

She looks at me like she's in love. I like that, a lot. I look at her the same way.

She loves everyone, but you'd never know it by staring at her. It's those steely Auschwitz eyes she has. She scares me a little bit with her seemingly calculated calmness.

She is adjusting to being around all of us, and us her. She keeps putting her rather significant paw on Barkley's head in an apparent offer to play, to which he has not yet learned to respond in kind. As you can imagine, the older Shitzu is nonplused. The old Chinese palace dog still knows how to bark and growl when the intruders arrive at the temple.

I'm trying to have a sense of hack humor about this stuff.