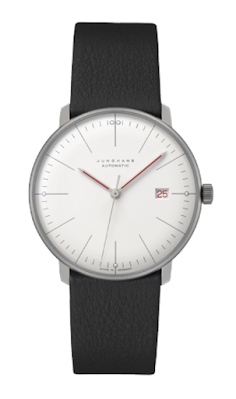 I bought a new watch, a self-winding mechanical, a thing of industrial beauty. Simplicity is elegance, a friend once relayed me. I believe she was quoting someone else. The phrase remained with me, even though it is quite obviously untrue in many cases. At least as it pertains to design, it works for me as an axiom. In personal devices I prefer the thinnest of lines. I might be seeking in the external world what I often fail to achieve within myself - an easiness of being, a delicacy of spirit.
No numbers for the hours, only the day of the month - just lines, sweeping red hands, and little dots that glow in the dark. Two at the top of the dial to distinguish its orientation in the dark, when perhaps it is not on the wrist.
The 20th century is filled with scenes, both written and filmed, involving wristwatches. All manner of metaphor and symbolic import can be attached to them, if you wish. This is where many of my Romantic ideals take flight: from the past. Within a year I will stop setting it and it will never have the correct time available. How absurd is it that I will use my cell phone to correct it, when I do. How much more useless can an object be. It exists and functions, if at all, as a result of newer and better technology. An ornament that makes a trophy from my apathy.
The watchmaker was the official timekeeper for the Olympic games in Munich, 1972. Black September, etc. Maybe I won't remind people of that if I find myself talking about it to anybody. It is not as if the watchmaker was to blame for the terror attack. They just happen to be based in Germany. Dumb luck, that. It could have happened to any German watch company. Most of my friends are lost in a miasma of historical confusion anyway, so there is little gain and little lost in offering this tidbit of data. I just like to know that I have an in-built way to divert or abort conversation, as I choose.
I had hoped that buying the watch would help pull me out of a spiraling blue funk that I have been in for months, a feeling of useless malaise, covidepression. We will see when it arrives if it has this effect. There is something about participating in a dying process that I cannot seem to keep myself away from. I look at all of my old Nikon film cameras and manual lenses and I wonder how long they will keep making film. I'll look at this watch often when I first get it, never actually caring what time it is.
.
Posted by Sean Q6 at 2:54 PM