The decade of retrograde 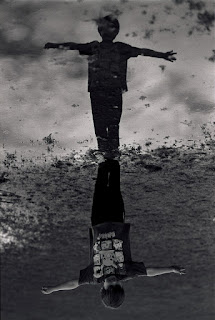 Why does the image of someone holding their arms out in a crucifix position, especially when inverted, cause me unsettled feelings. I like it, and even think it's beautiful in its own way, but it bothers me. I have tried to be a good atheist. I swear it, but something lingers in the orbital pneuma, a reverence for death perhaps or sacrifice. Reverence or fascination; I don't know. Perhaps it is that the image is my son.

Maybe I spent too much time playing with Ouija boards when I was enduring puberty. Who knows.  There was some retrograde going back there for a decade or two. Mercury, etc.


I was thinking about something I said, I mean wrote, here a few days ago concerning the amicably suggestive nature of psychics. It occurred to me that everybody wants to believe that their lives have consequence. People argue one another to try to establish it, others fret the desperate sense that there is none. But a psychic lets you feel the idea of consequence for your own life, then imbues it with some connection to the universe. Who doesn't like a bit of that?

I have tried to be a good atheist. That made me smile.