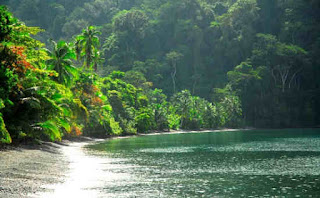 (I didn't take this picture)

We made it. A full day in the car driving through the impressive mountains and jungle. I have been to Costa Rica many times before but tend to visit the central and northern coasts because that's where the parties that I have played have been. Never having been south of Quepos before, to my memory. It's not as if I have necessarily avoided the more touristy southern areas but that has been the result of me being brought here by friends who do so. Now I feel a little bit cheated by their choices, though that is of course ridiculous, the places I have visited have always been very beautiful. But nothing like this.

There were torrential rains last night as we were preparing to sleep in our jungle cabinas. A close lightning and thunder strike sent the boy jumping into bed with fear though that subsided quickly with me holding and assuring him all was safe and well. He thought that he would not be able to fall asleep with so much sound of rain and thunder, but that was not the case. I told him that I found the sound comforting and easy to sleep to but that turned out to not be the case, though my sleeplessness might be caused by any number of things, notwithstanding the rain.

The result is always the same - my mind races with anxiety. I got up sometime well after midnight and ate a few Xanax, hoping for the best, but the best was not to be. They only committed my body to a style of lethargy. My mind was able to dismiss them easily enough with its usual runaway reveries and celestial concerns. The jungle rain and darkness providing the screen and soundtrack upon which they could cast their horrors and summon them to life, ratifying the endless unscripted acts with only minor climax or denouement, though boundless conflict staged from the merest fragments still lying around in the folds of what was once my own mind.

I would write more but I am on vacation. There is a bar near the restaurant that overlooks the valley that leads down to the ocean. It is an arresting view. They make a type of margarita there called the Mexicana, with pineapple juice and just a touch of grenadine. These help offset the beer nicely, and they seem to simply sing with the pharmaceuticals, like a choir made from the auditory fecundity of nature, now everywhere enveloping.