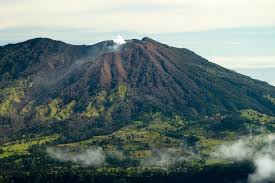 Not much time to report today. We are heading out of Cartago early, where we have been staying with friends, to head towards the coast. We will spend one night somewhere before traveling south to the Osa Peninsula, where we will explore the jungles and beaches for another two days.

Yesterday we drove up to Irazú Volcano, a place that I have tried to visit in the past though unsuccessfully. You must get there in the morning most days for it to be clear enough to see the dual calderas, which we were able to do. I have some pictures on my camera but am lying in bed, pre-coffee, and I will not get up to deal with them now.

Here are two that I found online that give you pretty much all the idea that you need to have about it. The volcano is known locally as El Coloso because of its history as being active in the past, and somewhat terrifyingly so. 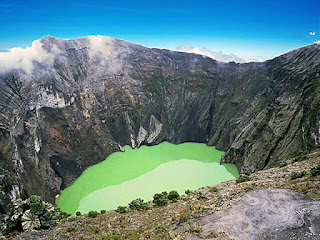 The waters in the caldera were not purely green yesterday. They were a variety of colors, but with one glance you could see that they were very mineral rich. They were far more interesting to look at than the picture above shows, but not enough for me to be anything more than lazy in this moment.

It famously erupted when John F. Kennedy was here visiting in 1963. I have slept in the room that Jackie and John also slept in at the old US Ambassador's mansion. It was bought by a friend of mine and I would stay there often when I would visit in the late 90s and early 00s.

Okay, nothing much else to report. It is coffee time now and then we must get on the road for our next place. I have no idea if we will have wifi there or the place after that. You will have to keep checking here to see if I have again updated my mostly stationary travelogue.