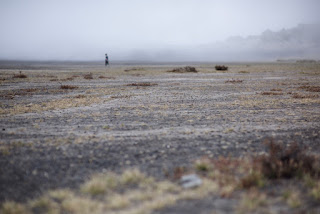 I had hoped to be done with vacation photos, at least for now, but that's all I have. So, here is one of the boy walking around an ash field next to a massive volcano's caldera. I like it - texture without statement. It evokes something without saying anything, perhaps.

I am back at work today. The world didn't collapse or explode without me, which is of course disappointing, for them to go on without me, as if.  Others should need me more, sort of.

I'm never sure if it's preferable to be needed or to be anonymous, involved or unnamed, desperate or desperate to depart. I suppose that everybody is a bit of both or fluctuates between the two, else romance might be less complicated, or maybe even much more impossible than it already is.

Not my romance, I mean yours. Your relationship has problems; I don't know why. I could tell you a partial reason, or make a plausible one up, but you wouldn't believe me for very long. You'd find me interesting for a while because I would be talking about you, like a psychic that notices essences which please and fascinate you.

That's why there is never any end to discussing the issues of love - people don't change, they adjust. Those adjustments are never good enough for very long. It's called "growing apart." It means that someone is getting bored when they're not feeling provoked or becoming infuriated. Love arouses little curiosity concerning the self. Who among us was born imperfect in this regard.

And infidelities. Those are a problem that often follow other problems. People are unreasonable. They expect others to change for them. If you wish to be left alone then eventually you will be.

We should ask the citizens of the Planet of the Apes how they did it, then model our new world loosely off of theirs. All we know with certainty is that ours is broken, paradise is tomorrow or the day after, hell is eternal yet somehow ever connected to the sins of the new and the now.

It makes no sense. The next best idea will be ideal, faultless until the thinnest of cracks appears along the outer curve of the crystal, presaging the need for its shattering. The past accessed through splinters, cinders, and shards, each sharper than ones that arrived before, until distance becomes soft, dull, lost, or out of focus.

I was listening to a song called Eternal Recurrence as I wrote that last paragraph - blame it, blame time, blame anything but me, blame yourself for having listened, blame the volcanoes, blame the apes, blame the love, condemn the dust, the grapes, the vine, don't change but jesus please adjust.