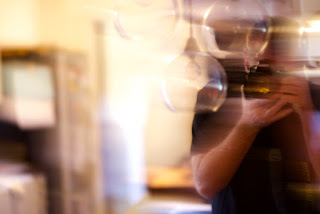 It has been raining for weeks, now the sun has come out but I am in a self-imposed prison of sorts. It is a security position at work. I must be within minutes of my computer at all times. Though I am aching to get on my bike and ride.

A new lens arrived in the mail today. It is a beauty, one that I've wanted for a while now - Nikon manual focus 35mm f1.4 AI-S. When I have collected all of the manual film lenses that I want I am certain that the major film manufacturers will cease production. I am like CS in this. What can I do except move to the Ukraine, or somewhere in which some version of 35mm film can still be bought, and all phone calls are made with a rotary dial. What? I should be ostracized from the digital world as a heretic.

Say what you will, but slowly I have accumulated the film camera body (FM3a) and set of prime lenses that I want - 24, 35, 50, 85, and 135. I suppose that I could also have an 18 and 105, also, though I rarely ever bring more than one lens with me when I go out shooting. They are all beauties, each a cascading new height of post-WW II Japanese engineering.

I - on the other hand - have just become a massive dork about them - a form of eccentricity that feels feasible.

If I ever come into money then be assured that I'll roundly denounce Japanese camera and lens maker, then become a newly patriotic German. Touting their strengths. You've been warned. If you're going to be a camera dork then Leica is the system to own. But I am lazy, my aspirations towards snobbishness only ever strive to the mid-market, and I am smitten for the collecting.

It's what happens to a middle aged man when he is left alone with his paycheck.

I have retained so much of the graceless enthusiasm of my childhood.