Notes from the Afterlife 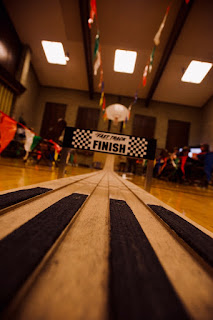 After a grueling bike ride - mountain, technical, exhausting, 1500 feet of climbing, slow moving progress - in which I further aggravated a ligament or tendon in my left shoulder there was the yearly Pinewood Derby race. I shot with auto-white balance and everything came out terribly yellow and/or red. When will I learn...?  I ordered a white balance card. The ligament issue in my shoulder had me walking around as if I had a lame arm, afraid to lift it, then last night I woke up with some muscular issue on the right side which I'm convinced is a reaction to the other side. Pain shot down the side of my neck like electricity sourced from pain. Now I'm walking around as if I have broken my neck several times and the cervical vertebrae - whichever ones are opposite of the atlas and axis -  have fused, reducing my head's mobility to near nil.

For two years now I have had almost perpetual ligament injuries and muscular strains of some kind. They just seem to move freely around my body, bouncing from side to side as if playing tennis with my nervous and muscular systems. These pains chew on my mind. The victor malady maybe one day getting to claim the triumph of my suicide. Okay, okay - too dark. But constant physical pain is as legitimate a reason as any other, and there are many. I'm not contemplating suicide. I'm only justifying it, and not necessarily for future reference.

This is why I don't want to write any more. At least for today.