"I wish that I knew what I know now" 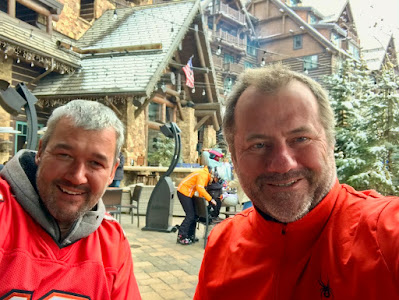 I told you.... that's us at the Ritz Carlton in Beaver Creek. My face looks about twice as big as my buddy's because it is. Everybody has their cross to bear, mine's my skull. I should know better by now and always have my friends take the selfie, so that I can arrange my face compositionally behind the other face or faces. This will help make it seem more normal. It's not normal, but there are tricks that can be employed in photography to make things seem other than they are.
Yesterday was really something. A full day snowboarding. We did about 13-14 runs and 25 miles. I have started to ride glades. Those are patches of trees that can be reasonably maneuvered around, often separated by runs on either side. My skill levels are not quite up to where they need to be to do such a thing, but that is often how one learns.
I'm still a little bit surprised at myself for taking up the hobby of snowboarding at this age. I wonder how long before I simply can not get myself locked into my bindings. You will see older people still skiing, often together as cute retired couples, but there are no older snowboarders. I am the oldest that I've ever met. So, I begin to ask myself if snowboarding is simply something that becomes too difficult to do as you age, or if the relative newness of the sport has created a population of mostly younger - or at least younger than me - snowboarders. That, as I get older I will also see others like me.
Perhaps there is just that one injury that takes them out of the sport for life. Every day that I ride it occurs to me that what I am doing is in fact a rather dangerous thing to do. If I stop and think about the risk vs. reward it does raise some questions. But, what did I end yesterday's post with? Something about my high willingness to purchase the cosmetic feelings of freedom. Could anything be more indicative of such a thing as a privately owned ski resort where my buddy and I happily bought $10 draft beers. Perhaps only Disney World offers a similar superficiality of feeling and experience.
Today: Vail.
.
Posted by Sean Q6 at 6:13 AM