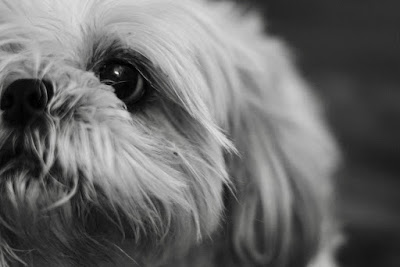 I have been sending a lot of family pics to CS. He loves them, I think, though I taught him how to silence text threads on his phone and computer just in case. He worries about appearances, etc. Having a friend like him around can be very useful, especially in a cautionary capacity. Though he also teaches me about things that I've never bothered studying, and some that I have.
I send him family pictures, but he doesn't seem to enjoy their wholesomeness, their factual historical recording of privately held affections.
Weird - all of my other friends on Instagram seem perfectly content with my familial photographic generosity. Perhaps CS really is spending too much time alone. I have given him a variety or recommendation s, though most were efforts to save his mortal soul from eternal torment through the loving redemption of my best buddy, Jesus Christ.
Well, I don't understand why - if the democrats are funneling innocent children through a pizza shop for the purpose of sex trafficking, to steal the election - the law can't do something about it. Why is it that the person in charge lets these things happen? The Deep State must be far more powerful than anybody had ever dreamed, but not powerful enough to oust Trump from power. Those fuckers tried. We all saw what happened.
Wait, that was written for a different site. I'll have my editors take it down. I am just riffing off of the things I've read or the conversations that I've had recently. I'm just trying to avoid writing about the horror that is living on the west coast right now.
We have found a way to still get our kicks around the house, though. The boy made an encampment in the living room by re-arranging all of the furniture and then slept in it last night. We found a ten-pack of Fuji Instax, so we did some flashing and shuttering.
The one of Akira the pup was taken from within the fort entrance. The one of the boy is him taking a fish-angle pic of me using his Lomography plastic camera. Then, there is Raquel and I.
In the bespoke tent there were secret signs and Christmas lights strung along the circumference and lighting stands buttressed by bags of steel-cut oats and dog food so that they would sustain the suspended sheets in a triangular formation and a skeleton from Halloween along with other assorted ghouls and goblins and pumpkins orange a discoball spider crawling one side and then there was also a sleeping eight year old boy, happy as a kid in the fort of his own making.
Oh, Sunday... what will you do with me next? 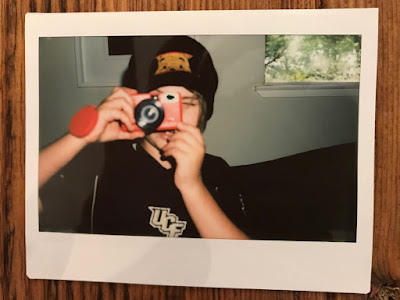 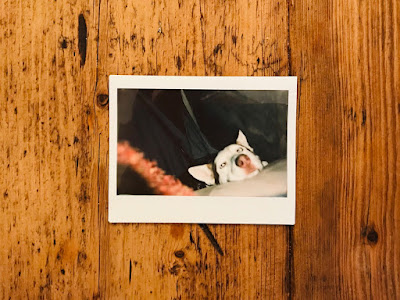 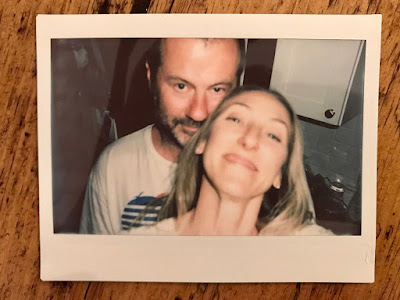