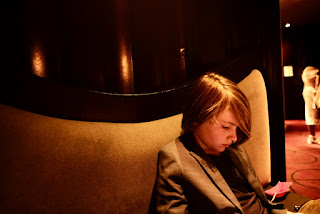 And a night out in Vegas is precisely what we did. I ate a $100 ribeye steak, with two Negronis. We watched the Bellagio water fountain show from the Eiffel Tower terrace restaurant, etc., etc. We drove the boy up and down The Strip, well past the portion of it that tourists still arrive here for, and into a strange territory that is slowly collapsing as it still tries to represent casual wealth and the Playboy lifestyle. As Trump might say, This section of Vegas is obviously governed by the democrats, we're sending in troops.
It should surprise no one that Trump Tower is in the poorly managed section of town. Or, at its edge, anyway. Somehow the gold letters on the building seem gaudy and gauche, even in a place like this. I would say, How does he do it? But the effect is achieved at least somewhat subjectively. There are people from all over this nation who are likely keeping that tower afloat, even though he likely has nothing at all to do with the management or owning of the casino. It is Trump in name only, I would guess.
There is one observation that there is difficult to navigate around, or even drive by: Trump is the most American person there is.
Today we will drive to Red River Canyon.
It looks like this: 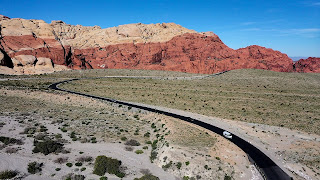