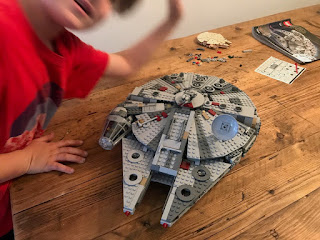 The Millennium Falcon is complete. It took us about three days, off and on. An oddly satisfying enterprise, though I tend to doubt that I would get as much joy repeating a similar act too quickly. Most of what made me happy about it was just sitting with the boy and sharing enthusiasm for it.

I've held off drinking wine until just now. I mean, just now, today. I gave a neighbor two hundred bucks and he gave me a case of a red blend wine that was not bad, a case of Pinot Noir that was slightly better, and half a case of assorted but altogether nicer wines, all but one of which Rachel drank. They were sparkling wines, so it was her thing.

The drinking of wine has rendered me tired most of the day. I have grown tired of being tired, but what the fuck else is there to do? I have been smoking opium, also, but it is of poor quality. I thought that I was smoking it wrong. Getting the perfect temperature is not always easy. So, there has been Xanax, edibles, and hash sometimes, as well. Time has become a flat, meaningless oval filled with rotating glass shards of death and suffering. But, you already know that.

I was here to report on the good news to all of creation, the gospel, as it were.

There was one moment today where I explained to the boy why we love Han Solo so much That... he went from being a self-interested smuggler to participating in a group for the common good. We get to see something mean more to him than what we had been led to believe, up until that point, that he was capable of. He was the Keith Richards of the the Rebel Alliance. I reminded him that Princess Leia and Han Solo also had a child together, then a falling out, and that the child they had was evil and stupid and snotty, but that we need not maintain any comparisons or consistencies with their galactic story and ours.

I was probably confusing the poor lad. He has always believed me to be Darth Vader's father.