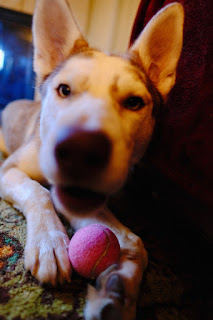 I'm not sure if I've ever seen two dogs have consensual sex. Having lived in Florida for the irresponsible length of time that I did it seems nearly impossible to have not seen such a thing, though I have no specific memory of it. All I see now when I close my mind and think of the Sunspot State are dogs fucking in the dirt. Mostly in the backyard. Everybody has a backyard there, and every backyard a dog. It never seemed to me as if it was the female dog's choice.

I see this all the time at the dog park now. Dogs just rape each other. They try to get some playtime in before and after, but every now and then you witness some sort of sudden assault. The owners are mortified, of course. I try to stop the dogs when I can, as if my dog is partially to blame. She was wearing a brightly colored collar.

If you've never tried to stop one dog from fucking another dog you'll know this is not exactly a one person operation. It requires practice and training, and life affords so few opportunities, and few partners to do that dance. I try to match everybody else's enthusiasm for separating them, but sometimes I suspect that people can sense my heart's not really in it. I suppose I could just grab the male by the collar and toss him away somewhere, but that somehow seems worse than the sex crime itself.

Since I have a female it is usually some male that is being indiscreet about their amorous feelings towards my lucky lady. So, it is up to a variety of Sonoma hippy-chicks of all ages to stop the assault, mostly. I'd be lying to say that this doesn't make me giggle a little bit inside. Not because of the act itself or their reaction, but you can see how much they project human morality onto their animals and expect it to come to life there, fully formed and evidenced in modesty of behavior, discretion. I always take some time out afterwards to tell the offending dog about my best friend, Jesus Christ. This will have about as much influence on their desire to rape as will the frantic stream of invectives and direction emanating from their owners - No! and Stop! and Insert Dog's Name! here.

The one that really gets me is Bad Dog!

I suspect that in a dog's mind screamed phrases like No! and Stop! only mean Hurry, hurry... to them. It only seems to increase the urgency of the act.

She has been spayed, I'll explain, but I don't know if they cut off the flow of all of her woman parts.