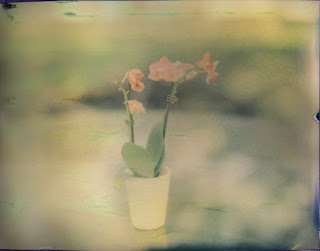 Perhaps this image was a charmed failure, as CS says, but I like it more than just about any other image I've seen in a few months. If I could create images like this, in-camera, then it is all that you would see from me for a while. I have grown too comfortable with the family snapshot portraits, and I have made a few lucky mistakes, but I am unorganized and rarely learn from my mistakes, or remember how to repeat them. My life as a series of charmed accidents. I tried some street photography the other day but only by walking out to the street in front of our house and trying to find anything of interest. There was none, or very little, to my eye. For that, I miss living in a city. I want a road trip, just to take pictures.

I awoke to songs and praise and love and kisses and gifts. Rachel and Rhys had worked together to create a nice little Father's Day surprise for me. There was a new toolbox waiting on the kitchen counter for me with handmade cards and funny store bought ones. I was asked a while back and it was the most functional thing I could think of that I needed - a new toolbox. They went into secret action, and found me a very nice one. It looks like it will last another 25 years, as my last one did. Rhys is eager to transfer everything out of the old broken one today and into the new one with all the clean compartments for screws and nails and whatnots. What could possibly be more wholesome and sweet, than is his simple and pure desire to just be my son and to participate in my life.

I've spent so much of my life wondering why people aren't more resilient. They seem to be traumatized by everything. Perhaps they are. Life is tough and psyches are fragile, trauma gives people something private to hold and share about themselves, or to keep bundled up like a secret, still-born baby. Perhaps they wish to reveal the thing in parts or whole, to help explain the chaos that leaps around inside of them at times.

People make mistakes, and then there are others that are always vindictive and cruel, as if that behavior forms a form of truth about existence that should be shared, to help toughen up those who might otherwise fall prey to those actions elsewhere. Kids and dogs don't have very many options for escape from such situations. I have seen it. I was relatively lucky. My life was free from what would be now considered abuse for the most part, though few believe that and there are some quizzical components to my past, to be sure. But I never felt abused, just misunderstood and mildly neglected. I'm fucked up mostly because I wanted to be. I allowed it, then encouraged it, and then couldn't stop it. So, here I am.

But not this morning, not with a new toolbox - a fresh place to sort through the broken chaos, the runaway pieces of hardware, fasteners made of metal, sharp little objects capable of piercing the skin,  or affixing boards of wood, the unfinished or never started projects of my life, the chaos involved in a desire for an ability to fix things. Those things that become collected because few people discard what might one-day become useful again.

Now, I have a new place to repeat the endless partialness of being. If I had ever learned to complete things then I might know how to end this post. Somewhere there must be a fortified plastic box of bright colors designed to hold all of the loose question marks, exclamation points, and of course the ever-needed period, used to pin down and hold an otherwise unwieldy and runaway stream of words in search of their meaning, adhering itself to what came before or arrives next while also magically separating itself from it. Bent nails in uneven timber, hobbled together with the intention of bearing weight.

It all seems so simple - I hug my son often and tell him that I love him and believe in him, and hope that he remembers that. I feel comfortable growing old in front of him, more than anyone else. It's likely because I can not possibly keep up with him. Trying to would prove the fact.