Why can't "chemtrails" be photographed? 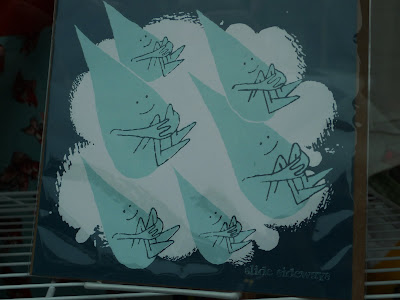 I have a friend who believes that "chemtrails" are not only a reality, they are perhaps the only relevant reality. I did a little research on them and I couldn't find anything of substance. Even the Wikipedia article sounded very non-convinced, with virtually no positive support for the assertion. If you can't mount an even vaguely ambitious argument for something on an open encyclopedia, editable by individuals, then your cause is spastically doomed. That, and no scientific evidence should seal their fate, one would think. But no, oh no, not in this great democracy of information. Wikipedia is probably in league with the government agencies that are creating these chemtrails, they might argue. Or another favorite of the conspiracy theorists: Wikipedia is doomed to obligatory ignorance, out of touch with these horrific realities, in league with all enemies of truth.
Speaking of Wikipedia.... here is an excerpt from their section on conspiracy theories:

Conspiracy theories are the subject of broad critique by academics, politicians, and the media.

Perhaps the most contentious aspect of a conspiracy theory is the problem of settling a particular theory's truth to the satisfaction of both its proponents and its opponents. Particular accusations of conspiracy vary widely in their plausibility, but some common standards for assessing their likely truth value may be applied in each case:

Noam Chomsky, an academic critical of the United States establishment, contrasts conspiracy theory as more or less the opposite of institutional analysis, which focuses mostly on the public, long-term behaviour of publicly known institutions, as recorded in, e.g. scholarly documents or mainstream media reports, rather than secretive coalitions of individuals.[21]

One would think that most conspiracy theories would have little or no resistance to debunking when looked at in this way. But no, because actual logic plays no role whatsoever in the creation or maintenance of most of these theories, it has no power to negate them. I have really wound my friend up by continuing to ask, "why can't chemtrails be photographed?" when that in fact is the only "proof" that this bong-water coalition offer of their existence. Chemtrails indeed....
That visual evidence, and Dennis Kucinich, of course. Oh, It is worth investigating that little gem...
In the way that some of my friends flock to "psychics" and are increasingly amazed that the better they get to know the individual psychic the more prescient her talk becomes ( I use the word "her" because the 'psychics' they attend are exclusively female). I can only assume that male psychics appeal to others due to their specific psychic needs.
Some of them are amazed right out of the starting gate, the first visit and the psychic seems to already know so much about them and their lives, forgoing the simple evidence that one or more of their friends has already visited this particular psychic, and they themselves are there on recommendation, and they have the word of their friend that nothing of their personal life has been previously discussed with said psychic.... the last thing a woman would do would be to discuss the emotional lives of her friends... with a stranger.... a psychic... why would they even need to...?
Sure.
I leave you with this image of a psychic sitting in her 'psychic storefront' with the ghostly image of me floating there above her, discerning all manner of cosmic vibrations..... possibly stealing her soul, but nothing sinister, just to have a chat with a spirit from beyond..... 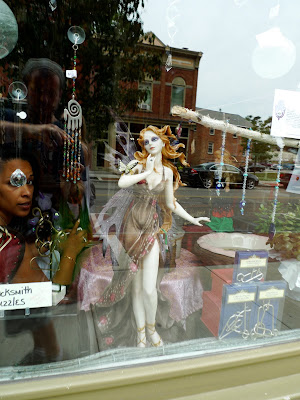