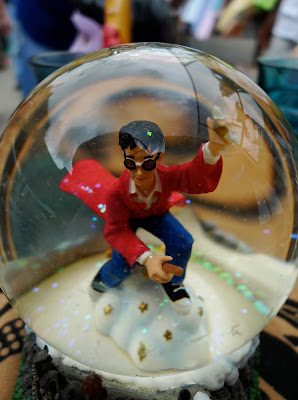 For many years in the East Village, on weekends, there has been a sort of summer flea-market on the property that the church owns at the corner of 11th St and Ave. A. They're no longer allowed to use the fenced-off, paved area next to the church. The property was sold to NYU, who tried to develop it, but were eventually stopped by the city. Rumors spread that there was some sort of toxic waste under the pavement and that no one could build until it was adequately dealt with. The expense of doing so was apparently prohibitive. That was fine with everybody in the neighborhood as they were planning on building some monstrous student-housing complex, which would have blocked our ever-diminishing view. The lot now sits dormant, apparently toxic waste only threatens buildings.

From the far cross corner there remains one of the few places that The Empire State Building can be seen from within the neighborhood. The dorms would have forever blocked that view.

The flea-market still happens, but it happens on the perimeter of the property now, spilling out over the sidewalk, and into the streets each weekend. 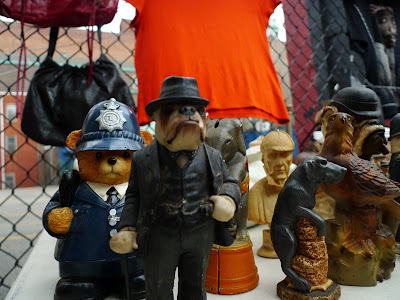 It is all just junk, of course. I wonder how this stuff has the life that it does, that it was once purchased and now can somehow be re-sold, that it magically retains any of its value at all. I've spent much of my life collecting rare and obscure records, scouring record stores to find pieces of music that I hadn't heard yet, made by a producer whose name I recognized from some other obscure record, or record label... Or endlessly searching for a record that I had only heard once before, remembering only one little vocal bit in it, a part from a movie, a sample from an even older record... Or perhaps having only just barely glimpsed the sleeve under strobed and neon lights, disoriented for hours, days, years... still searching.

But all of this stuff out on the streets each weekend... It seems to live on eternally on the shared junk shelves of the world, street-corners, or strewn from fences… a triumph of manufacturing. 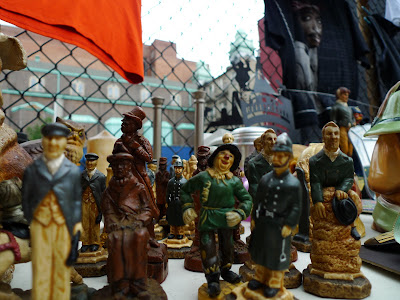 Perhaps I have wasted my life. I could have been a lucrative junk-trader. I think I have a keen eye for it. Though I suspect that I would eventually be detected in that small world and become an outcast there also. My intentions seem always somehow skewed, deeply flawed. I would increasingly gravitate towards the strange and haunting pieces, not just the cute little curiosities, but towards the bedeviled relics of a purchase-culture gone murderously berserk. 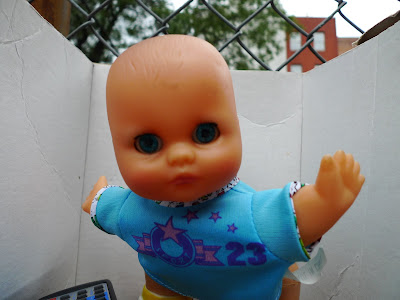 Perhaps I have wasted my life. I could have been a lucrative junk-trader. I think I have an extra eye for it. 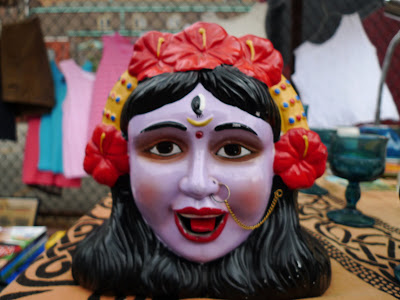