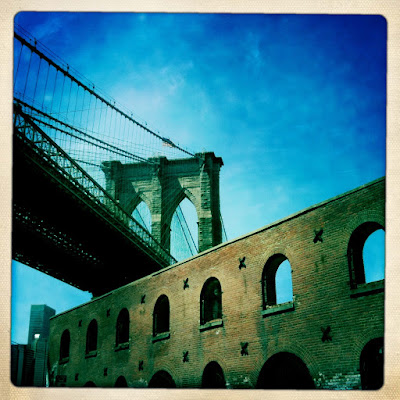 I rode my bike out to Brooklyn today. What a pleasant, artfully natty community they have out there...
From the Wikipedia article on "Hipster (contemporary subculture)":

Christian Lorentzen of Time Out New York claims that metrosexuality is the hipster appropriation of gay culture, as a trait carried over from their "Emo" phase. He writes that "these aesthetics are assimilated—cannibalized—into a repertoire of meaninglessness, from which the hipster can construct an identity in the manner of a collage, or a shuffled playlist on an iPod."[3] He argues that "hipsterism fetishizes the authentic" elements of all of the "fringe movements of the postwar era—Beat, hippie, punk, even grunge," and draws on the "cultural stores of every unmelted ethnicity" and "gay style," and then "regurgitates it with a winking inauthenticity" and a sense of irony. He claims that this group of "18-to-34-year-olds," who are mostly white, "have defanged, skinned and consumed" all of these influences.[3] Lorentzen says hipsters, "in their present undead incarnation," are "essentially people who think of themselves as being cooler than America," also referring to them as "the assassins of cool." He also criticizes how the subculture's original menace has long been abandoned and has been replaced with "the form of not-quite-passive aggression called snark."[3]

In a Huffington Post article entitled "Who's a Hipster?", Julia Plevin argues that the "definition of 'hipster' remains opaque to anyone outside this self-proclaiming, highly-selective circle". She claims that the "whole point of hipsters is that they avoid labels and being labeled. However, they all dress the same and act the same and conform in their non-conformity" to an "iconic carefully created sloppy vintage look".[18]

Rob Horning developed a critique of hipsterism in his April 2009 article "The Death of the Hipster" in PopMatters, exploring several possible definitions for the hipster. He muses that the hipster might be the "embodiment of postmodernism as a spent force, revealing what happens when pastiche and irony exhaust themselves as aesthetics," or might be "...a kind of permanent cultural middleman in hypermediated late capitalism, selling out alternative sources of social power developed by outsider groups, just as the original 'white negros' evinced by Norman Mailer did to the original, pre-pejorative 'hipsters'—blacks...." Horning also proposed that the role of hipsters may be to "... appropriat[e] the new cultural capital forms, delivering them to mainstream media in a commercial form and stripping their inventors... of the power and the glory...".[19] Horning argues that the "...problem with hipsters" is the "way in which they reduce the particularity of anything you might be curious about or invested in into the same dreary common denominator of how 'cool' it is perceived to be," as "...just another signifier of personal identity." Furthermore, he argues that the "hipster is defined by a lack of authenticity, by a sense of lateness to the scene" or the way that they transform the situation into a "self-conscious scene, something others can scrutinize and exploit." 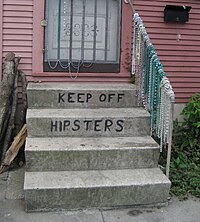 Time writer Dan Fletcher states that "Hipsters manage to attract a loathing unique in its intensity".

Dan Fletcher in Time seems to support this theory, positing that stores like Urban Outfitters have mass-produced hipster chic, merging hipsterdom with parts of mainstream culture, thus overshadowing its originators' still-strong alternative art and music scene.[4] According to Fletcher, "Hipsters manage to attract a loathing unique in its intensity. Critics have described the loosely defined group as smug, full of contradictions and, ultimately, the dead end of Western civilization."[4] Elise Thompson, an editor for the LA blog LAist argues that "people who came of age in the 70s and 80s punk rock movement seem to universally hate 'hipsters'", which she defines as people wearing "expensive 'alternative' fashion[s]", going to the "latest, coolest, hippest bar...[and] listen[ing] to the latest, coolest, hippest band." Thompson argues that hipsters "...don’t seem to subscribe to any particular philosophy... [or] ...particular genre of music." Instead, she argues that they are "soldiers of fortune of style" who take up whatever is popular and in style, "appropriat[ing] the style[s]" of past countercultural movements such as punk, while "discard[ing] everything that the style stood for."[20]

Funny stuff. I didn't actually see any of these "hipsters" this morning. It was probably too early for them to be milling about (before noon, etc.)… and perhaps I was too far South.
Posted by Sean Q6 at 10:57 AM