"Life is tough, but it's tougher when you're stupid." 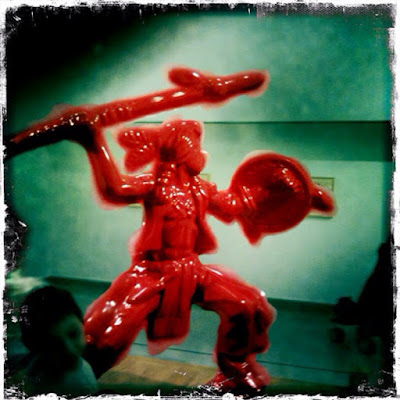 "Women have the right to work wherever they want, as long as they have the dinner ready when you get home." - John Wayne
From Wikipedia:
"I don't feel we did wrong in taking this great country away from them if that's what you're asking. Our so called stealing of this country was just a question of survival. There were great numbers of people who needed new land the Indians were selfishly trying to keep it for themselves.... I'm quite sure that the concept of a Government-run reservation... seems to be what the socialists are working for now — to have everyone cared for from cradle to grave.... But you can't whine and bellyache 'cause somebody else got a break and you didn't, like those Indians are. We'll all be on a reservation soon if the socialists keep subsidizing groups like them with our tax money." - John Wayne Interview with Playboy May 1, 1971
Oh, it gets better….
Also from Wikipedia:
"I believe in white supremacy until blacks are educated to a point of responsibility. I don't believe in giving authority and positions of leadership and judgment to irresponsible people.... The academic community has developed certain tests that determine whether the blacks are sufficiently equipped scholastically.... I don't feel guilty about the fact that five or ten generations ago these people were slaves. Now I'm not condoning slavery. It's just a fact of life, like the kid who getsinfantile paralysis and can't play football like the rest of us.[43]" - John Wayne Interview with Playboy May 1, 1971
"There is nothing more frightful than ignorance in action." - Goethe
Posted by Sean Q6 at 10:49 AM